Last fall, we put out a quick report on just how many crashes had occurred between cars, pedestrians and cyclists since 2017. The numbers, and the visual representing it were jaw-dropping. Since then, we’ve been hard at work developing a more comprehensive representation of the crashes in our city, those that lead to injury and death, and where they’re happening most often so that we can identify where our partners in the city can do the most good first.

Study after study proves that redesign, rather than increased enforcement, truly works to make using roads and sidewalks safer for those who walk, roll, or ride as well as those who drive. With crash rates skyrocketing since 2019, billions in federal infrastructure dollars coming, and increased discretionary budgets to the tune of $800,000+ for each Common Council member, we can and must get started right away on redesigning our most dangerous streets in the city of Buffalo.

The planners on our team at GObike, namely Ashley Smith and Cindy Wood, spent weeks combing through data made available by state and national governments. Upon identifying areas with high rates of crashes and injury, they then balanced those numbers out based on the traffic. For instance, we all know Bailey Ave is dangerous for drivers, people who walk, roll, bike, but it’s also got a ton of traffic on it, so is it actually more dangerous than any other street? Or the same, but it’s just busier? Answer: Even when increased traffic is factored in, Bailey is remains one of the highest injury rate roads in the entire city. The formulas used in our calculations are explained in-depth inside the report.

Here is the city of Buffalo’s High Injury Network Map. 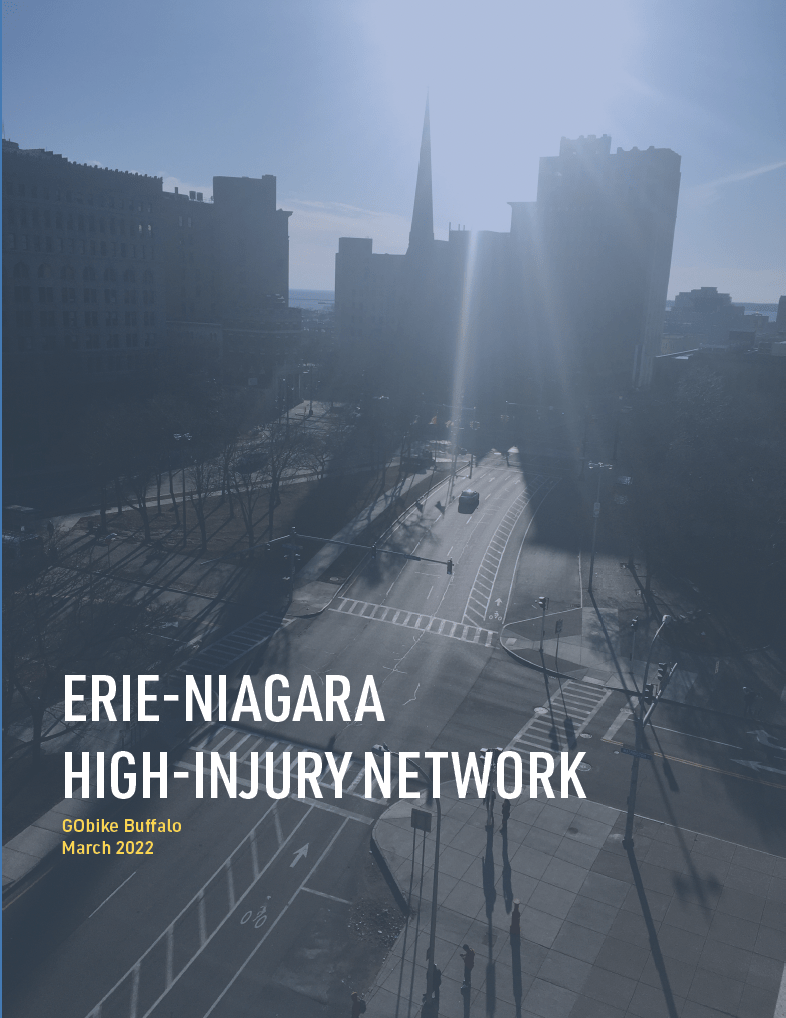 Where do we go from here?

Because this is a city-wide issue, we already gave the Buffalo Common Council and Mayor’s offices a heads up about it last week, and since then, the meetings between our office and theirs in the Common Council have begun. Expect press events and plans to be rolled out soon. We look forward to working with each district on developing new designs, public engagement campaigns, and more.

We also asked the Common Council to make a resolution supporting the Crash Victims Rights and Safety Act. Multiple bills from that umbrella would help in this effort from providing more aid in funding to implement Complete Streets designs, more aid in funding to maintain all the new concrete, delineators, and paint, and allowing municipalities to lower speed limits as low as 20mph on any street or road, not just those in school zones (currently not legal state-wide). These bills are currently advancing in the Senate and stalling in the Assembly. You can contact your representative about it here.

We’ll break it down over the next three weeks.

Starting Tuesday March 29, we’ll be releasing in-depth reports on each of the city’s nine council districts, in alphabetical order. We encourage you to read each fully to understand the state of our city’s traffic safety, and join us in moving forward in a positive direction with real plans for design improvement, not just rhetoric.