BIG PROBLEM: Since 2017, cars have hit walkers and cyclists this many times.

This level of vehicular violence against walkers and cyclists is unacceptable and we all have work to do to fix it. 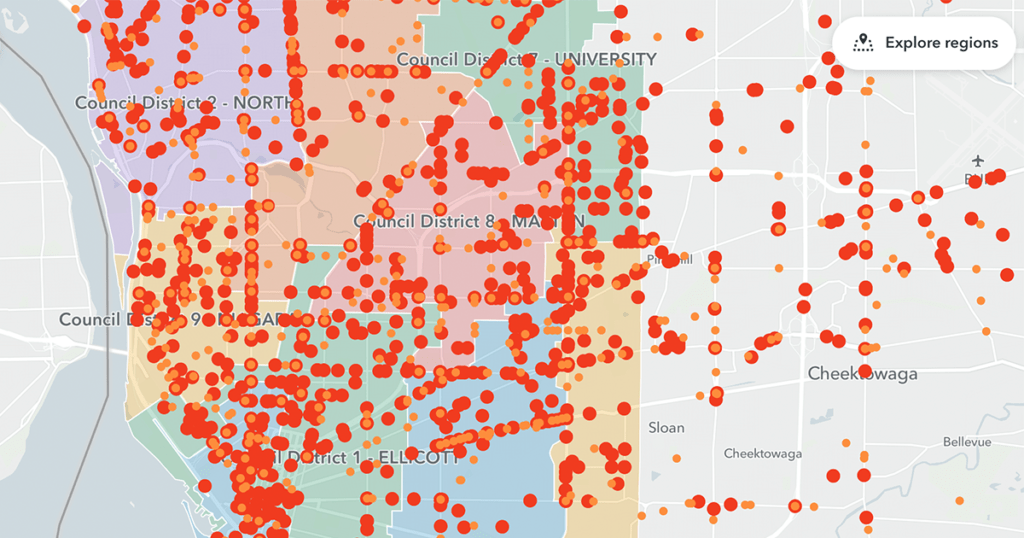 Title Image: The data points above were provided by the New York State Department of Transportation (DOT) and uploaded to Remix, a transit tool GObike uses to collect traffic and demographic data for its various projects. The map above shows vehicular crashes with pedestrians (red) and bicycles (orange) from January 1, 2017 – August 30, 2021.

In the city of Buffalo alone, a walker or cyclist was hit by a car 1,384 times in under five years. 20 of the crashes above across the region resulted in the victim of that crash dying.

Last week, 12-year-old Marcell Yanders was killed by a truck while walking home from his school, PS 18 Dr. Antonia Pantoja Community School. Later that week, another pedestrian was killed in Lovejoy by a car that attempted to leave the scene. That same night, two pedestrians were struck by cars, luckily, they survived.

As the title image shows, these crashes are not rare. At GObike, we don’t use the word accident in our lexicon, because these crashes resulting in countless injuries and deaths are preventable. When a driver chooses to speed, blow a stop sign or red light, drive distracted by picking up their phone or drive under the influence of drugs and alcohol, it’s not an accident. Additionally, our city streets are designed to accommodate distracted drivers and speeding vehicles. Nearly all of Buffalo’s streets are wider than is necessary, subliminally giving drivers a sense of comfort in going fast and taking their eyes off the road.

We’ve all been fed the line that Buffalonians know how to drive in the snow. But just because we don’t fishtail down every street doesn’t mean we’re collectively good drivers. We’re not. And that’s the same across the board from the city to the suburbs, where pedestrians and cyclists are being hit by cars at a roughly equal rate when considering density.

Calling for more enforcement of traffic laws is sticky. First, we cannot advocate for high speed chases through the city, highly likely to end in a terrible way, and we also need to think twice about advocating for more police interaction with citizens after all we learned through racial justice-focused dialogue and protests over the last few years.

There are two ways forward, both of which have been core to our mission and vision, and will remain so in the coming months and years:

Get word out about Road Rules, Road Safety

In partnership with the NYS Governor’s Traffic Safety Committee, we’ve been rolling out quick lessons on sharing the road over the last two months on our social media. They will often hit our informed audience on social, but it takes that informed audience sharing that message once more with their network to advance all of this.

Last weekend, one of our own staff was run off the road in North Tonawanda by a driver who believed that the pair of cyclists he was behind, then in front of and slamming his brakes to harass them, had no right to be on the road with other cars. They do – even when there aren’t designated bike lanes of sharrow symbols painted. Cyclists are even legally able to ride two-wide until a car is trying to pass. Every single cyclist has probably heard the “Get on the sidewalk!” chirp from an uninformed driver when, in fact, it’s less safe to ride on the sidewalk due to the higher chance of a crash at every intersection, and in the City of Buffalo, it’s illegal to ride the sidewalk if you’re age 14 or older. Many of these rules of the road haven’t been considered by drivers since their written test to get a learner’s permit, and massive campaigns need to be undertaken to change these perceptions. Drivers must yield to cyclists and pedestrians, every time. Not just when they feel like it, just as cyclists must yield to pedestrians, too.

We all remember a few years back when someone jumped the curb of the 198, killed a toddler in Delaware Park, and injured his older sister. The reaction from NYS was swift. A 50MPH highway that we allowed to be placed in the middle of an Olmsted park was lowered immediately to 30MPH. The backlash was just as swift. While driving down a roadway that looked like a high speed expressway, drivers felt like they were going extremely slow. Even former County Executive Joel Giambra tried to use whatever remaining clout he had to call for an end to the lower speed limit because he was uncomfortable adding 28 seconds to his commute on RT198, end-to-end. When pedestrians and cyclists are hit and killed on our city and suburban-controlled streets, the reaction is rarely as swift. Have we all collectively decided that our transportation system should be all about cars and pedestrians and cyclists should just take their chances? Is it too late to change this collective mantra?

The feeling that 30MPH is ridiculous on the Scajaquada Expressway is because of its design. Narrow each lane with concrete, plant greenery next to the curb, and suddenly 30MPH feels normal.

The same can be said for our city and suburban streets. There’s a series of factors that subliminally give drivers confidence to break the law. Drivers have more room on streets and in car lanes than they need to veer a few feet left or right off course, so why not check that text or email? Our wide, straight roads allow drivers to easily see far down the road, so why not go a little faster than the limit? At intersections, we’ve allowed the paint around our crosswalks to fade, and only a few of our school districts have flashing lights indicating their speed zones. Drivers receive less and less reminders about pedestrian crossings and feel more confident rolling or going full speed through stop signs, or running red lights long after the light has changed.

In the case of Marcell Yanders, there were no painted crosswalks anywhere around his elementary school. A series of one way streets in the surrounding neighborhood give drivers more ability to speed without any opposing traffic. This failure in design allowed the reckless driving that the 14th Street Block Club had rallied city leaders to change with temporary and permanent projects. That work never came, and a boy is dead.

Last weekend, neighbors banded together and illegally painted the crosswalks themselves. Who could blame them for wanting to see something, anything done?

Repainting is just the minimum.

GObike does similar work. Funded by grants or municipal funding, and with permits from local jurisdictions, we’ll study an area and listen to the needs and concerns of the neighbors. We develop solutions that often use paint and temporary delineators (plastic sticks that keep cars away from curbs in intersections), then we study the results. But our work is temporary. The paint fades, and so does its impact on drivers after the immediate shock of its implementation.

We study the results and submit reports to municipalities and, along with the activated neighbors, advocate for these changes to be made permanent. That doesn’t just mean maintaining the paint. We want to see concrete used to permanently extend curbs and narrow the lane at intersections so that cars are forced to slow. Metal bollards can also be used as a permanent fixture that forces cars to avoid them and slow in doing so. Our planners and licensed Complete Streets engineer, draw up these plans with pedestrians, cyclists, cars, fire trucks and buses all accommodated. These are complete streets, and it’s how we change our city and region to make it easier and safer for people to get around without a car. 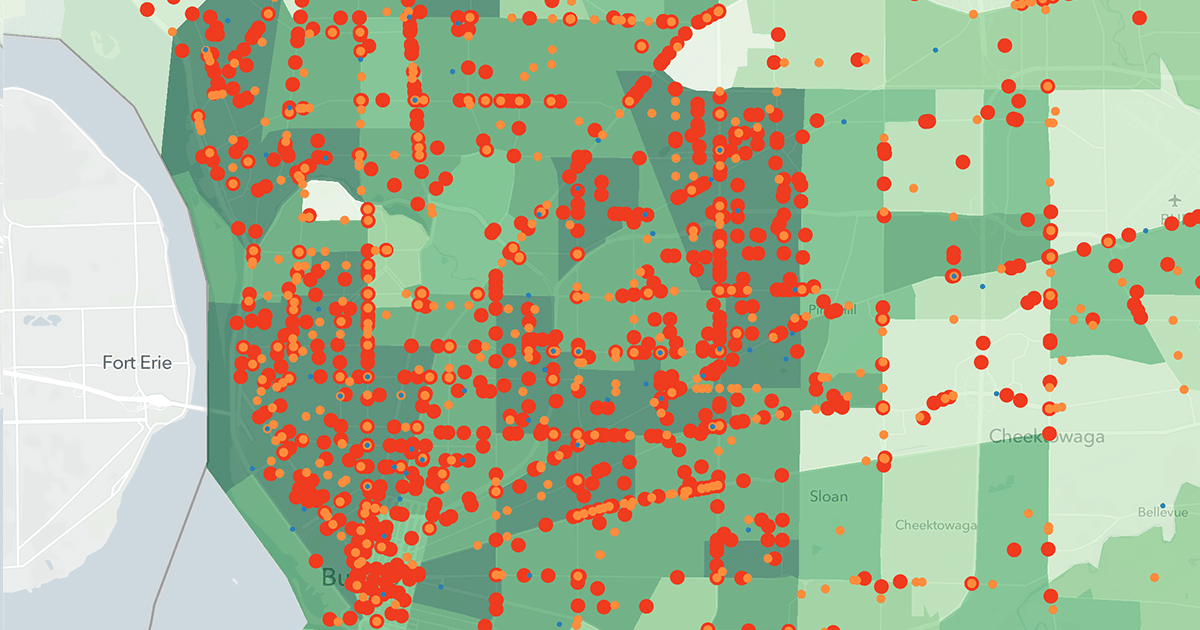 In this image, the map highlights the density of households with no cars, with darker green tracts having a higher percentage of those no-car homes. The crash data is from the same time period as the title image.

Cars have dominated our city and region’s design, space, and mindset for too long. All these crashes are unacceptable and we all need to be activated to make that point at city and town halls across the region in the years to come.

A municipality has a duty of care and a responsibility to provide safe pedestrian and bicycle facilities as they are legal users of the public right of way.  Historically, these modes have been neglected simply by someone making a judgment about what is important and what is a nuisance.  These types of myopic choices have no future for equity in transportation. Municipalities that do not apply best practices to street design are negligent and liable as we have experienced here in our fair city and we expect more.

We’ll continue with our physical work, our education work, and we’ll be ramping up our community engagement work. Look for instructional articles about how to create impactful action plans and gain neighborhood support. There will also be opportunities to volunteer with us to implement our pilot projects out in the street, and please consider becoming a member of GObike. When we reference our hundreds of members, it’s a fantastic start. When we talk about our thousands of members, there’s real power to see real change happen.

Walk, bike, ride and drive safely this season. Let’s not accept another pedestrian or cyclist’s death.