Miro Rakic is a data and analytics professional at Independent Health. He has been a resident of Buffalo for over 20 years and loves to ride his bikes here. As a member of the local bike community, his accumulated experience and knowledge has made him an excellent mentor and motivator to many. Our latest Spoke Folk is dedicated to him. GObike’s Outreach and Communications Coordinator, Luke Medina, sat down with Miro last Friday at Spot on Hertel to talk conquering barriers to riding and approaching new challenges.

Can you tell me a little about yourself and your relationship to Buffalo?

So I’m 38. I’ve lived in Buffalo since 1998. I came here as a refugee, and I settled in Buffalo, and I’ve never really left. I didn’t get into bikes right away. It was kind of like a consequence of getting injured and not being able to run anymore. So I forced myself to get on a bike. So originally, it was like just riding for the sake of being active and moving around.

So I got a road bike. And I was just like doing laps of Delaware Park. I also kind of learned how to do the basic mechanical stuff, like just changing a flat. I think that’s the thing that keeps most people off the bike. They think if they get a flat, or loose steam or something, -they’re stuck.

GB:  How would you recommend starting out riding and learning about bikes?

Miro: Two to -five minute YouTube videos can give you everything you need in terms of getting back in the saddle if you have a small mechanical issue. If it’s a tire problem or maybe derailleur issue or whatever, most of the stuff you can repair with minimal tools and minimal knowledge. I think that’s really the thing that keeps people off the bike. I don’t know, the US is kind of weird because we think of cycling as a thing where you either race or you don’t do it at all. Whereas in other European countries, or maybe even Asian countries, a bike is just like a form of transportation. You don’t need special equipment. You don’t need fancy bikes. It’s viewed as a utility.

GB: Another thing that makes people hesitant to ride are safety concerns. What advice would you give in regards to that?

Miro: Well for one thing, people have this animosity towards cyclists for some reason. In the city it’s not even malicious. People are just distracted, right? You’re on the phone or this or that. Also the infrastructure has been improving, but it’s not always there. Yeah, the safety factor definitely keeps people off the bike. I would say, always anticipate other people to make a mistake on the road. Stay vigilant, wear a helmet, and do your best to be seen when you’re sharing the road with cars.

It feels like when you’re on the bike, you’re in this weird in-between. If you’re in the road and sharing the road with the cars, you have a risk of them hitting you because not every driver wants you out there, and not every diver is paying attention. But if you’re on a trail and sharing the road with people on foot, then you need to take responsibility for their safety, and account for any mistakes that can happen when passing or something like that.

GB: It gets cold in Buffalo and typically people take the winter off from cycling. How would you encourage someone to get into winter riding?

Miro: The thing that gets beat up when the winter rolls around are your hands and feet. As long as you have those covered or insulated, you’re totally fine. -You’ll be surprised at how far you can go after those first five minutes pass. Your equipment in the winter definitely needs attention, but you don’t need to spend tons of money on fancy thermal gear or make crazy adjustments to your ride. Riding in the cold is an attitude thing. You do need to get adjusted. Sometimes it is hard to step outside, but once you do it a few times, it is not bad, and it’s super rewarding.

GB: Last year, there were only 17 days when plows needed to hit the streets. Otherwise, plenty of days to get out and ride in the winter

Miro: I’m surprised by that number. It seems like it would be higher. When you think about it, it feels like it’s more than 17 days. I have a combination of studded tires and regular tires. So when there’s snow and ice piled up on the ground, I put up my studded tires. And now that I think about it, I don’t think I’ve used my static tire more than like, 10 times. So yeah, that sort of makes sense! But that is surprising. 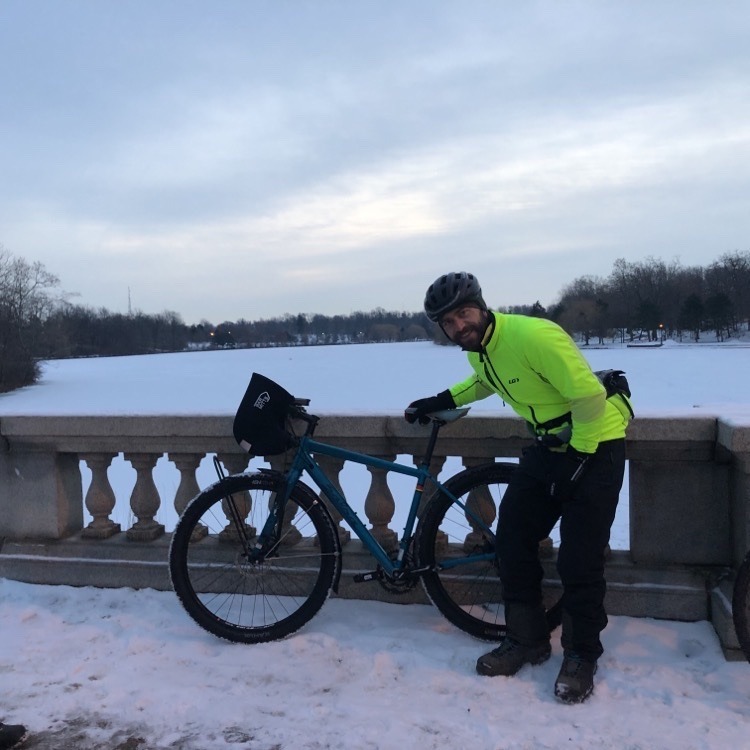 GB: Are there any places in Buffalo you like to ride in particular? Have any places improved since you’ve lived here?

Miro: I’m really enjoying the improved Niagara Street developments. Having those bike lanes kind of connects the two parts of the city. You’re connected to the Delaware Park area. We can now kind of sneak under the bridge, get behind the Tops and get over there and find your way eventually to Delaware Park. The new lanes also connect to downtown by way of Niagara Street, and all that is good stuff for all of us.

GB: What bike routes would you like to see improvement on?

Miro: I wish there was something done on Main Street. I know Main Street downtown has a lot of bike access, and I like the improvements they did around Ferry and Lafayette. But the further up north you go, into South Campus and further north into Amherst, I’d like to see more improvements for bikes on that part of the road. I wish they would just kind of redo all that. I don’t know who they are, whoever is in charge of making these decisions.

Not only would it be so much cooler, it would just like really connect communities here. If there were other physical pathways that weren’t just for cars, the city would benefit.

With the pandemic, a lot of people were getting outside and walking around and buying bikes just because they couldn’t go to the gym. So a lot of people got back into riding or began riding more often, which is great. Hopefully we can keep that momentum going.

GB: I agree with you, I feel that I’ve been seeing people utilize their bikes more than I have in the past. But I’ve also noticed a lot more people who ride in opposing traffic. What would you say to someone who feels safer riding in the opposite direction of cars?

Miro: When I’m coming up on somebody and they’re like, in the wrong lane facing me on the bike, I always have an internal battle. Do I say something? Do I help them understand that they’re in the wrong lane? But it’s hard to compel a person in like a 30 second conversation without really going into detail why it’s safer to be riding with traffic as opposed to against traffic. You’re not going to be able to do that in such a short amount of time. I think it requires some examples, and potential situations that can arise out of riding the wrong way. But I guess if this is for the audience that’s trying to learn about this, the biggest risk in riding in the opposite direction is drivers coming out of the side streets are always looking to their left, because that’s where the cars are coming from. And so they’re going to look left, if they’re making a right turn, they’re just kind of sneaking in, they’re going to be looking left to see if there’s a car coming. If there’s nothing on the left, they’re going to go ahead and make their turn. And if you’re coming from the opposite direction, they’re not going to be looking your way. That is the single biggest risk that I think people just don’t think about. When you’re riding with the traffic, people are gonna see you because the cars are coming from that side.

GB: Do you have any closing comments? Any final words for people newly approaching cycling or trying to expand their knowledge of cycling?

Miro: Over time, I’ve come to appreciate the whole bike culture, and different styles of riding. I certainly have respect for athletes who are out there, training hard, putting all of their heart into it. But also I have the same amount of respect for just like the casual rider who’s just trying to exercise. They’re still out there doing their thing. Plus nowadays, there’s just so many different styles of bikes and so many different niches. There’s plenty of avenues to approach cycling. I’ve been challenging myself to try it all just because I’m curious.

My main point of advice is have fun with it, and find what works for you. If you’re doing something for yourself, you might as well have fun with it. Stay motivated, set goals, and never take yourself too seriously!