How easily could children and older adults walk across RT 20 here?

In 2014, the Village of Fredonia, NY committed to pedestrian-friendly, bike-accessible streets. Eight years later, they have yet to make good on that promise.

On July 11, the Board of Trustees (Fredonia’s Town Council) met to discuss business, and the future of Route 20 (Main Street) was up for discussion amongst other things.

Susan Parker, Chautauqua County Legislator for District 4 which includes Fredonia, has been leading the effort to transform Main Street into a “Complete Street” which is the moniker for design standards that give equal consideration in design and construction to people out walking and biking as they do to cars (currently, most streets in WNY put car space and car speed first and squeeze in space for those not driving a car where they can, often creating dangerous streets and roads for children and families to utilize outside of their vehicles). Amidst an alarming rise in traffic injuries and deaths statewide since 2019, preserving the status quo in road design is dangerous.

Parker formed a Complete Streets Committee which includes members of the Board of Trustees. The committee presented to the entire board that evening, but the Fredonia Observer neglected to report on any of their commentary and instead focused solely on the Fredonia’s former attorney Sam Drayo’s negative feedback about the project.

In light of that one-sided coverage from the Observer, we wanted to utilize the expertise of our team of planners and engineers to provide some counterpoints to his questions and complaints:

The cars-first approach to transportation design has failed miserably.

Drayo, in the Observer:
“The Complete Streets concept wants government to do everything to accommodate vehicles, pedestrians and bicycles, all at a considerable government expense,” he said. “When many purposes and uses are attempted to be incorporated in one location, something usually suffers and ultimately there’s unintended consequences.”

This is correct. For decades we have been designing our streets for one purpose only – to move vehicles as quickly as we can from point A to B. This has negatively affected community health, economic activity has declined, transportation has become the largest emitter of greenhouse gas emissions and safety has gotten worse for our most vulnerable roadway users with pedestrian fatalities up 62 percent since 2009.

Drayo in the Observer:
“The advocates of Complete Streets “should remember there is also a personal responsibility for walkers as well as bikers to be safe.” He suggested the village look at laws requiring walkers to use reflective equipment at night.

Roadway design has a strong impact on how people drive, often more influential on driver behavior than the posted speed limit. While speed limit signs may only be posted every few blocks or miles, the road’s design is ever-present, continually providing guidance and visual cues. While there are myriad factors involved in these deaths, our streets are dangerous by design, designed to move many cars quickly at the expense of safety for everyone who uses them. – Smart Growth America, Dangerous by Design (2022).

What’s more – as a response to an effort to use design to simply slow cars down, Drayo is advocating instead that Fredonia police ticket citizens out walking at night for what they’re wearing? Mandating they spend their money on reflective gear just to go for a walk? Even if residents weren’t ticketed, this sounds more like a victim-blaiming effort to remove responsibility from drivers who hit and injure or kill people out walking, by arbitrarily declaring they weren’t dressed in bright enough clothing, whether they were lawfully using the street or not.

The number one reason emergency services are called is for automobile crashes.

From the Observer:
He then addressed the proposal from a panel, composed of Parker and others, to reconstruct Main Street with so-called “refuges” in the middle for pedestrians. Drayo called it a “permanent and unnecessary obstruction… Emergency vehicles, such as police or fire, may very well be blocked or stopped in the roadway and prevented from using the middle lane because of the permanent fixtures in the middle of the roadway.”

As a society we value quick response when emergencies arise. We also value health, safety from traffic crashes, livable neighborhoods, and places where people of all ages can feel comfortable walking and bicycling. A refuge provides that safety and comfort. The vast majority of emergency calls are made for traffic crashes. Nationwide, traffic fatalities outnumber fire fatalies 16:1, traffic injuries outnumber fire injuries 167:1. At some point we need to do the work that’s proven to increase safety on our roads so we can avoid some of these emergencies in the first place.

Collectively, we need to reduce the use of motor vehicles to curtail energy consumption and release of GHG emissions. In order to accomplish these latter goals, we need to design streets built for human scale and activity rather than just for motor vehicle speed. Each community has different challenges, so collaboration between local fire departments, urban planners, transportation engineers and public health officials will be invaluable to meeting these goals. – Best Practices: Emergency Access in Healthy Streets (2013) https://nacto.org/wp-content/uploads/2015/04/Best-Practices-Emergency-Access-in-Healthy-Streets.pdf

Walkable Communities and the Local Government Commission produced a detailed book called Emergency Response: Traffic Calming and Traditional Neighborhood Streets (Burden and Zykofsky, 2001). The book provides guidance on where to use which type of traffic calming measures and the pros and cons related to emergency access. They determined that medians and landscaping can calm traffic without impacting emergency response time.

(Also, see below about Hamburg) 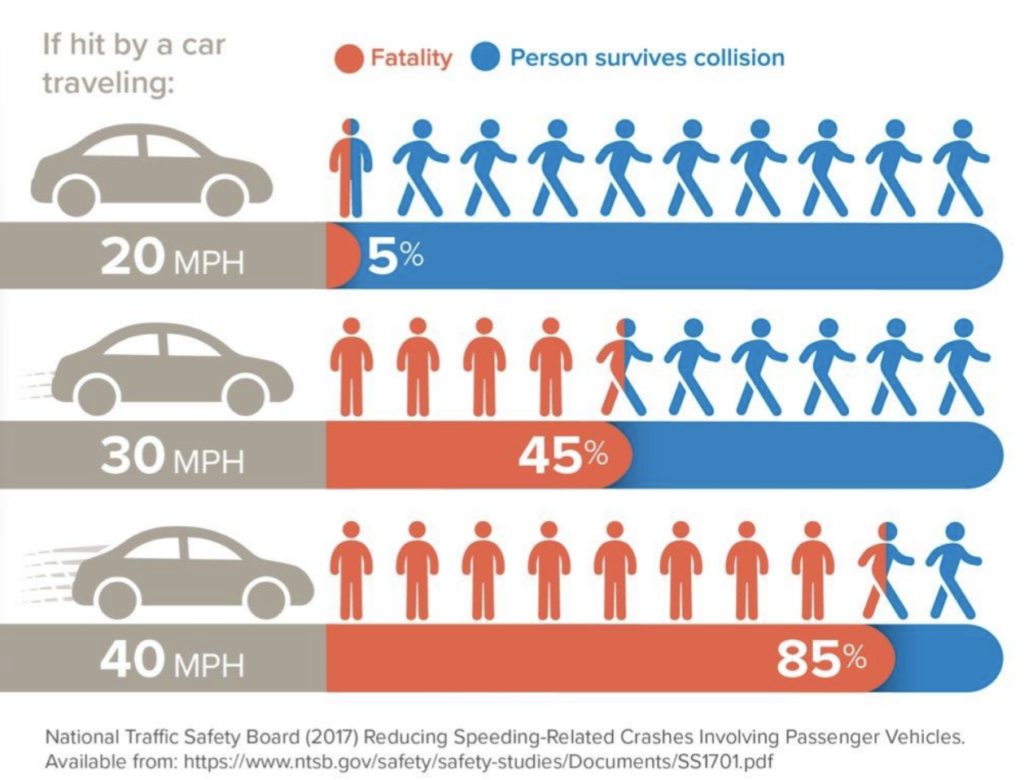 The argument that traffic calming will actually… calm traffic makes sense to us, too.

The Observer:
Drayo added that reducing the width of lanes will further back up traffic and contribute to accidents. He encouraged trustees to make up their own minds on the issue and not rely on others to think, or make decisions, for them.

According to the Federal Highway Administration (FHWA), lane width is an important design criteria. Narrower lanes can improve comfort and safety for vulnerable users. By narrowing lanes, designers can create space for a separated or protected bike lane, a widened sidewalk with buffer and reduced crossing distances for people out walking, or a standard bike lane and widened buffer. Narrower lanes, as an element of an integrated street design, can contribute to lower operating speeds. The AASHTO Green Book offers substantial flexibility regarding lane widths, allowing a range of between 9 and 12 feet depending on desired speed, capacity, and context of a roadway (2011, p. 4-7). While 12-foot lanes have been used historically as motor vehicle travel lanes, the AASHTO Green Book allows 10-foot travel lanes in low speed environments (45 mi/h or less) (2011, pp. 4-7–4-8). Designers have avoided using narrower lane widths in the past due to concerns about safety and congestion especially on arterial roadways. However, research on suburban and urban arterials has shown that in most cases, travel lane widths between 10 feet and 11 feet as a part of a thoughtful, integrated design of arterials and collectors do not negatively impact overall motor vehicle safety or operations and have no measurable effect on vehicular capacity. – US Department of Transportation, Federal Highway Administration, Achieving Multi-Modal Networks (2016): https://www.fhwa.dot.gov/environment/bicycle_pedestrian/publications/multimodal_networks/fhwahep16055.pdf

(Also, see below about Hamburg)

In the Observer, Alex Wieloszynski commented, “Look at Hamburg for an example of a complete streets plan completely transforming an area and paying back dividends. When I was growing up there, downtown was a ghost town relative to what’s there now. Go figure, pedestrian-friendly design leads to more foot traffic for businesses.”

Hamburg narrowed its drive lanes, increased buffers on its bike lanes, and received international attention for its roundabout installations. There’s since been a dramatic rise in economic activity, and the village has become an attractive place for young families and new business owners. Today, there are no headline grabbing traffic jams, nor complaints from emergency services about obstacles in their way. Concerns one has with the Complete Streets committee’s intentions in Fredonia can be addressed by just looking at Hamburg.

From the New York Times, “Widen Main St.? Community Had Other Ideas, and Thrived”:

That alternative was finished in 2009, and Ken Kuminski, the Transportation Department’s project manager for the reconstruction, showed it off on a recent morning. He started at one of four new roundabouts.
“We used to have major accidents where drivers were trying to beat the lights,” Mr. Kuminski said. Roundabouts force traffic to move much slower.
“Accidents in them need a tow truck,” he said, “not an ambulance.”
In fact, all of Hamburg’s Main Street was redesigned to slow vehicles, a technique known as traffic calming. Two lanes, instead of the three that had been planned, were built, and the lanes’ width was shrunk from 12 feet — highway-size ribbons that invite drivers to go fast — to 10 feet. That created more room for trees; on-street parking, which is good for businesses; and “safety lanes,” which provide room for drivers to open car doors safely and also serve as de facto bicycle lanes. In the two years after the reconstruction, car accidents on the new road dropped by 66 percent and injuries by 60 percent. For Mr. Kuminski, the project’s big lesson was “bigger is not better.”

Parker is seeking signatures to a petition requesting that Fredonia make good on its 2014 promise to be friendlier to people walking and cycling. If you live in, work in, or often frequent Fredonia, and would like to see safety on its roads improve, we encourage you to read and sign this petition.

This is an era where millions of people across the country can work remotely, and they are reconsidering large cities for small towns for their beauty and connectivity. Fredonia could be an attractive place for young professionals to set up shop if it starts to install the modern safety amenities those people have come to expect as access and safety for people on foot or on bikes is given equal consideration to the movement of cars. 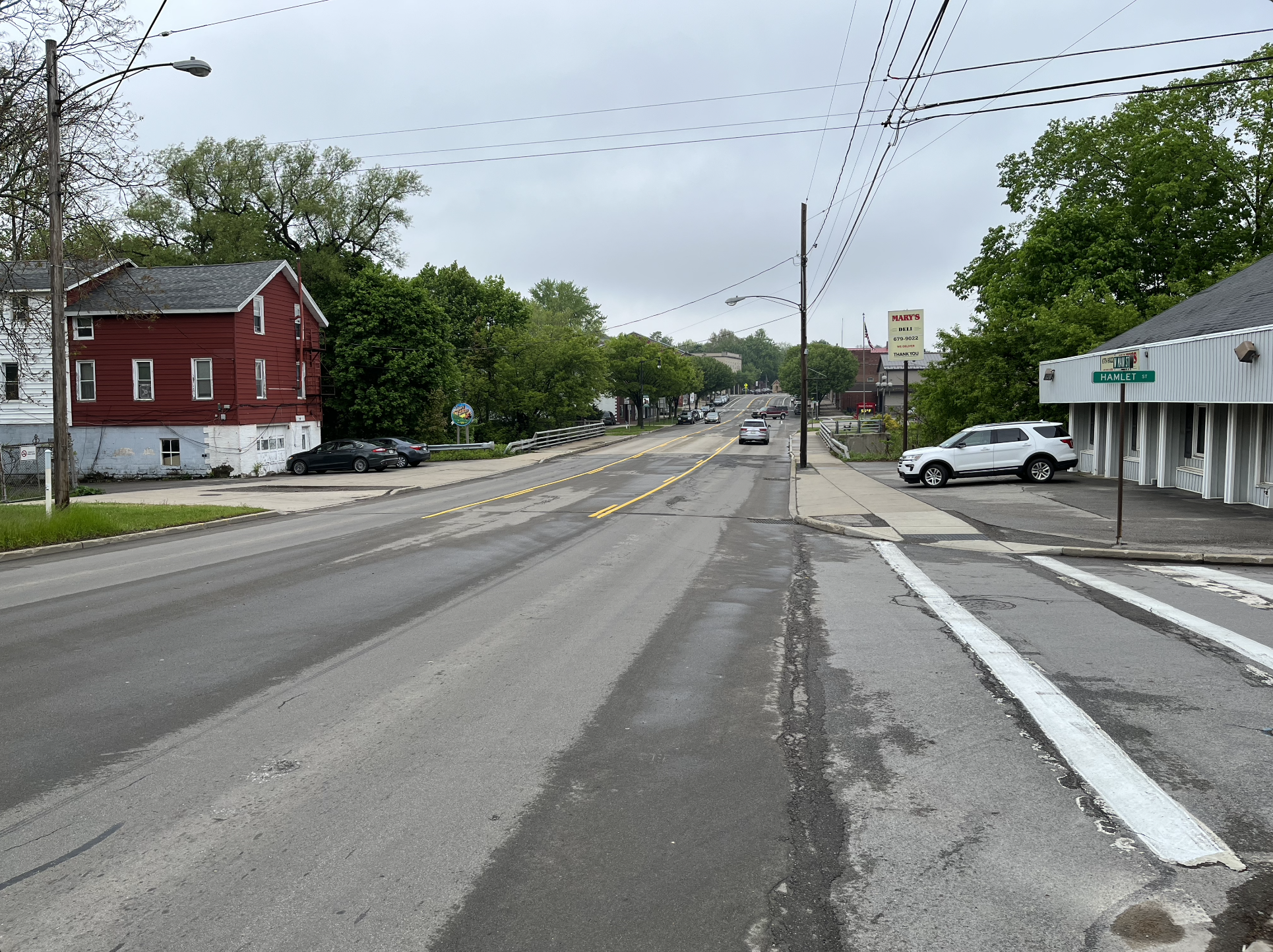