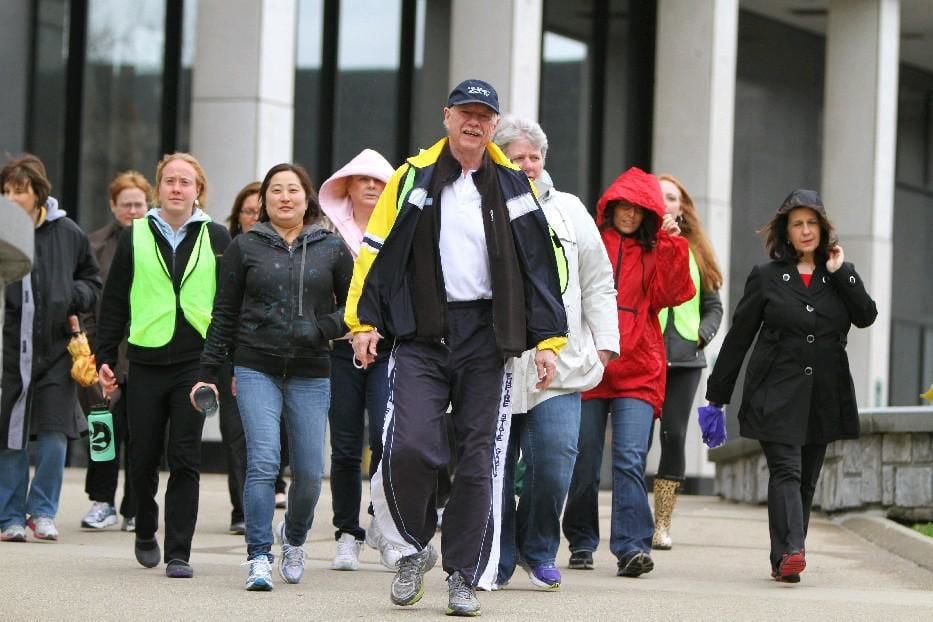 Philip L. Haberstro, foreground, founder and executive director of the Wellness Center of Greater Buffalo, who died Nov. 18, was the leading public health advocate in the region for more than 30 years and the force behind Buffalo being named an All America City. He and the institute helped forge several wellness-related nonprofit organizations and steered efforts to encourage more walking and walkable communities.

Philip L. Haberstro IV had one of the hardest jobs in Western New York during the last three decades: extolling the benefits of wellness in a region known for chicken wings.

“He understood that building health in our communities was so much more than lifting weights and eating properly,” said Justin Booth, executive director of GObike Buffalo. “It was about our community connections. It was our connection to the water and to our parks. It was the ability for everyone to have equal opportunity to create a livelihood in our communities, and how interactions with neighbors build entrepreneurial opportunities.”

Mr. Haberstro, a former semi-pro football player who made a much larger mark as co-founder and executive director of the Wellness Institute of Greater Buffalo, died Wednesday in his Town of Tonawanda home after a short illness. He was 72.Booth was among dozens of institute staff members and more than 200 college interns he mentored over 30 years, though his mission to improve wellness drove him throughout his life.

“Phil was my very first client,” said John Giardino, who met Mr. Haberstro in 1982 when he joined the downtown branch of the Buffalo Athletic Club.

Then a personal trainer at the BAC, Mr. Haberstro talked the young University at Buffalo law school student into helping him write a grant application so he could teach city firefighters to take better care of themselves on and off the job.

Mr. Haberstro left the BAC in 1983 to start his own business, Buffalo Fitness Consulting. He ran a gym for a time on Elmwood Avenue, and soon became one of the first fitness business owners in the region to offer workplace wellness programs.

He and Giardino worked together to establish the Wellness Institute as a nonprofit organization in 1989. It began with a small office in Buffalo City Hall – and big ideas.

“Wellness was not even a word in anyone’s vocabulary back then,” Giardino said. “The idea that you would treat your health proactively was not part of our culture back then. He would set up meetings with the health insurers in town to talk about how they should be affording coverage for the healthy things that people do, not just diagnostic and clinical services.”

Organizations that got their start at the institute included GObike Buffalo, the Buffalo Marathon, Massachusetts Avenue Project, Reddy Bikeshare, Explore Buffalo, Buffalo CarShare, Drums Along the Waterfront, Youth Advantage Sports and many others.

Booth worked for a decade at the Wellness Institute, starting in 2000 after graduating from SUNY Buffalo State. Mr. Haberstro taught him how to plan, establish and grow GObike into a nonprofit bicycling advocacy group before it struck out on its own in 2010.

“I can’t say enough about the opportunities he provided me,” Booth said.

Mr. Haberstro grew up in the Town of Tonawanda and graduated in 1965 from Cardinal O’Hara High School. He got a degree in physical education from SUNY Brockport State, where he played on the football team. He was a member of the Buffalo Old Boys Rugby Club.

He hosted the B-Well Buffalo cable public access TV show for many years and taught in the Daemen College master of public health program for the past six years. Students included Lucy Connery, who Mr. Haberstro trained to take over as Wellness Institute executive director last summer. He continued to chair the board until his death.

Mr. Haberstro was past program chairman of the New York State Governor’s Council for Lifetime Health and Fitness, and past president of the National Association for Health and Fitness. He was a board member of Buffalo Sunrise Rotary Club and Partners for a Livable Western New York.

During the 1970s and early ’80s, long before Mr. Haberstro became a fixture at health and wellness fairs, conferences and special events, he was a linebacker, and at times player-coach, with the Twin City Geminis semi-pro football team.

He tore ligaments and developed a crook in his right pinky finger during those years. He never got it straightened, even though many encouraged him to do so, including Geminis athletic trainer Bonnie Zimmerman, who he met in 1980 and married three years later.

He also spent much of his personal life focused on wellness.

Mr. Haberstro was a voracious reader who focused mostly on reading books by wellness gurus, or about urban, transportation or public health planning, as well as culture and history.

He loved family gatherings, where his sense of fun was on full display, especially for nieces and nephews.

“He was a promoter of Buffalo from when I can’t remember,” said a younger brother, Jim. “I loved him as a brother but maybe more importantly, I admired him.”

Mr. Haberstro and Giardino handled the lobbying and legwork that led the National Civic League in 1996 and 2002 to name Buffalo an All America City. The designation symbolizes the ability of citizens, government, businesses and nonprofit organizations to jointly address regional issues and produce results.

Mr. Haberstro tried unsuccessfully to get the recognition three times before he succeeded. Those who knew him best said the effort symbolized his greatest strength: an unwavering focus on collaboration to improve and inspire the hometown region he loved.
He used charm, an extensive network of contacts and, when needed, an unmatched tenacity in that mission, said John Craik, executive director of the Population Health Collaborative, a regional health planning agency.

A common thread throughout his accomplishments: Mr. Haberstro heaped praise on those who helped, said those who knew him best.

“He planted a whole heck of a lot of seeds,” Craik said.

Survivors include his wife and brother, as well as another brother, Greg.

A private graveside service is planned as well as a public memorial service next spring.