You, our volunteers, will then take these thoughts, and you’ll share them with your friends and families. Perhaps that is the coolest thing about our volunteers. Your energy and message spread further and wider the importance of complete streets than we alone could do through email and social media. You experience the transformation first-hand. Thank you for your dedication, hard work, and bringing that experience to people who otherwise would not have that experience.

At GObike, complete streets are our guiding philosophy. We believe families should feel protected from traffic violence when walking, playing, or biking near their homes. We think kids should be able to walk around their block without being injured or killed by a person in a motor vehicle. We believe business owners should feel safe when sweeping their sidewalks or painting their building facades. In simple terms, your life should not be at risk every time you are outside in the public realm.

Volunteers make GObike nimble and agile and able to respond to opportunities with real solutions. We’d like to recognize our volunteers.

Sophie Wisoff, GObike Intern and graduate student at the University of Buffalo, likes to say, “I pay to work for you guys.” Sophie helps our communications department with research and copywriting, and she also came on those sunny hot days throughout the summer to drink her ice coffee with outreach coordinator Marli and me, and then start the hard, heavy work of loading the bike trailer with “Pat” the Striper and other heavy equipment. She became an expert in servicing Pat, putting it together when it arrived, and became an expert in laying out crosswalks and teaching other volunteers how to use the equipment. Even though the heat made her dizzy, Sophie pressed on, cheerfully, placing stencils thousands of times in the heavy heat. When she looked a little woozy, I insisted she sit down to drink water and chill.

Sophie also roped in her boyfriend, Stephen, to refresh sharrows on Connecticut Avenue. We figured out a lockstep, standardized way to distribute cones and stencils, spray the paint, and then pick everything up to quickly move to the next spot. When all was said and done, Sophie and our GObike team, along with Stephen, finished 41 sharrows on Connecticut Avenue alone.

Mother and daughter team Jackie and Qin braved the craziest intersection in Buffalo: Seneca and Babcock streets. Austin Izzo pulled the 350 lb+ trailer straight up one of the steepest graded hills at the end of a hard day painting, continuing to the West Side with a big grin on his face. Devin Zimmer and Karen Huffman helped us do a record-breakingly fast mass crosswalk painting at North Park Academy and then bought us all a pizza, which we ate under the trees together. Margo Davis decided she and I weren’t going to be enough hands, so she called her friend, Jack, to join. “Oh, I call him all the time to join me to do stuff.” After hearing that I’d named the bike we pulled the trailer with (Hillary), Margo decided the Striper also deserved a name. Jack and she christened it, “Pat,” the non-binary paint striper. When I told Simon Husted about working the South Park Avenue and Hamburg Street crosswalks that he and Laluce Mitchell had done with us two years before, he exclaimed, “That intersection is scary!” Pat the Striper and help from Martha Heidinger and Councilman Mitch Nowakowski made all that a lot easier this year.

Sometimes the community partnership yielded unimagined benefits. Phil Beaver of Lovejoy had called me in the winter, looking for some relief for his neighborhood. When we arrived, it had been an exhausting pull from Buffalo’s west side with a fully loaded trailer and weak electric wheel. I thought it was just going to be a team of four as no one had responded to Phil’s call for volunteers on the Facebook page. Instead, Phil recruited his friend Keith into helping for two days straight. A nearby ice cream shop owner insisted we stop after work and get a cone for free. Phil donated pizza and drinks for lunch. After the first day, Keith decided we needed more help and asked his girlfriend to come out.

Somehow, putting in sometimes seven days a week, sometimes 12 hour days, we were able to finish all the projects in Buffalo we set out to do. It was exhausting, but there is no way we would’ve completed all those projects without all the help we got, from Brian Kean helping paint bikons on Linwood or Phil Beaver loaning us garage space and filling our bags full of candy. After we finished everything in Buffalo, weighing on my mind was the whale of a project ahead in Lackawanna.

Like GObike’s very first tactical pop-up at MLK Park in 2017, the proposed Ridge Road project was a first: more than a mile of a protected bike lane with transit access and conflict-zone paint. So far, we had only used Pat the Striper to fill in stencils. Now we had to paint the lines. Straight ones. Once you paint a line on the street, it better be straight, which is nerve-wracking. You can’t erase paint on the road.

When we started the project on Fuhrmann Blvd, volunteers Ethan Richenberg and Mike Ahern joined us. Although Mike told me he couldn’t do any heavy stuff, he stayed with us all day. It was a challenging and exhausting day. Ethan, an engineer by training, decided to stick it out to the bitter end. We started the project on Monday, August 31, and finished on September 23. We had some break days and some rain, so we weren’t there every single day, but it was a long, seemingly endless project.

When you start a new type of pop-up, there is a fair amount of time figuring out how to tackle its logistics. Each day, we unloaded the truck, located the plastic gloves, applied the chalk, started Pat the Striper up, and cleared the lane for paint. There are about 1,000 little things you have to do to get everyone prepped so the work can begin. Ethan fit right in, going over the plan with Jim Jones, engineer and Michaelangelo of the project plan, and measuring and marking every square foot of the 1.4 mile track. Measuring and marking are hard work because you are repeatedly bent over. Even though you aren’t carrying anything heavy, it is exhausting work because of the sun beating down, which is why I always delegated that task to Ethan (if he wanted it ). Luckily for all of us, he always did. He became an expert at it, and when Jim wasn’t there, Ethan carried us on.

There was occasionally a real esprit de corps, like the Saturday when I unexpectedly got nearly ten volunteers, all on time, first thing in the morning. I am used to start my first hour by myself, then slowly delegating tasks out as people showed up. I was a little flummoxed when Josh Robinson, Brianna Batista, Greg Sampson, Zhi Phua, Mark Davies, Nick Solly, Rob Brandon, and Vilma showed up. They were there waiting at the meet site when I rolled up.

While I got my act together, I asked them to scrape the heavy paint residue building up on the stencils. Greg didn’t think we had good enough tools, so he went home and picked up his hammers and scrapers. They cheerfully chipped away, making the stencils probably 75% lighter. Big piles of dried paint started piling up while Zhi & Vilma built yellow delineators to line the protected cycle track.

Finally, Pat the Striper was ready to go. Greg and Zhi headed off to mark bump-outs while everyone else set out to do as many crosswalks as possible. We were a vision. I was so impressed by the flawless execution, how not a single second was wasted, when Councilman John Ingram of the Lackawanna City Council walked up, I couldn’t contain my pride in them. While we all waited for the paint to dry, I told the volunteers stories, stories of how the tactical pop-up program came to be, and how Councilman Ingram was a critical voice in receiving approval for the project.

In these indelible moments, the easy and the hard, we build community. It is difficult to grasp our humanity sometimes and feel connected through digital-only mediums. It’s harder still during the pandemic to truly revel in what human beings can build together. Though not knowing each other and possibly having different values and politics, we can come together and have a beautiful day and look at each other with pride for what we accomplished.

On Ridge Road, different minds came together and showed each other what was possible. Nadine Chalmers of the NFTA would stop painting and start snapping pictures whenever a bus went by; “That’s not the way you’re supposed to do it, I’m going to have to train them,” she exclaimed. From Reddy Bike, Jen White and an intern came to understand better the environment Reddy Bike is trying to build for all bikes. As frequent multimodal bus and bike users, Simon Husted and Patrick McNichol contemplated how to use a cycle track with a bus line incorporated into it.

You, our volunteers, will then take these thoughts, and you’ll share them with your friends and families. Perhaps that is the coolest thing about our volunteers. Your energy and message spread further and wider the importance of complete streets than we alone could do through email and social media. You experience the transformation first-hand. Thank you for your dedication, hard work, and bringing that experience to people who otherwise would not have that experience.

If you were unable to volunteer and want to support our work, please consider donating or becoming a member today. 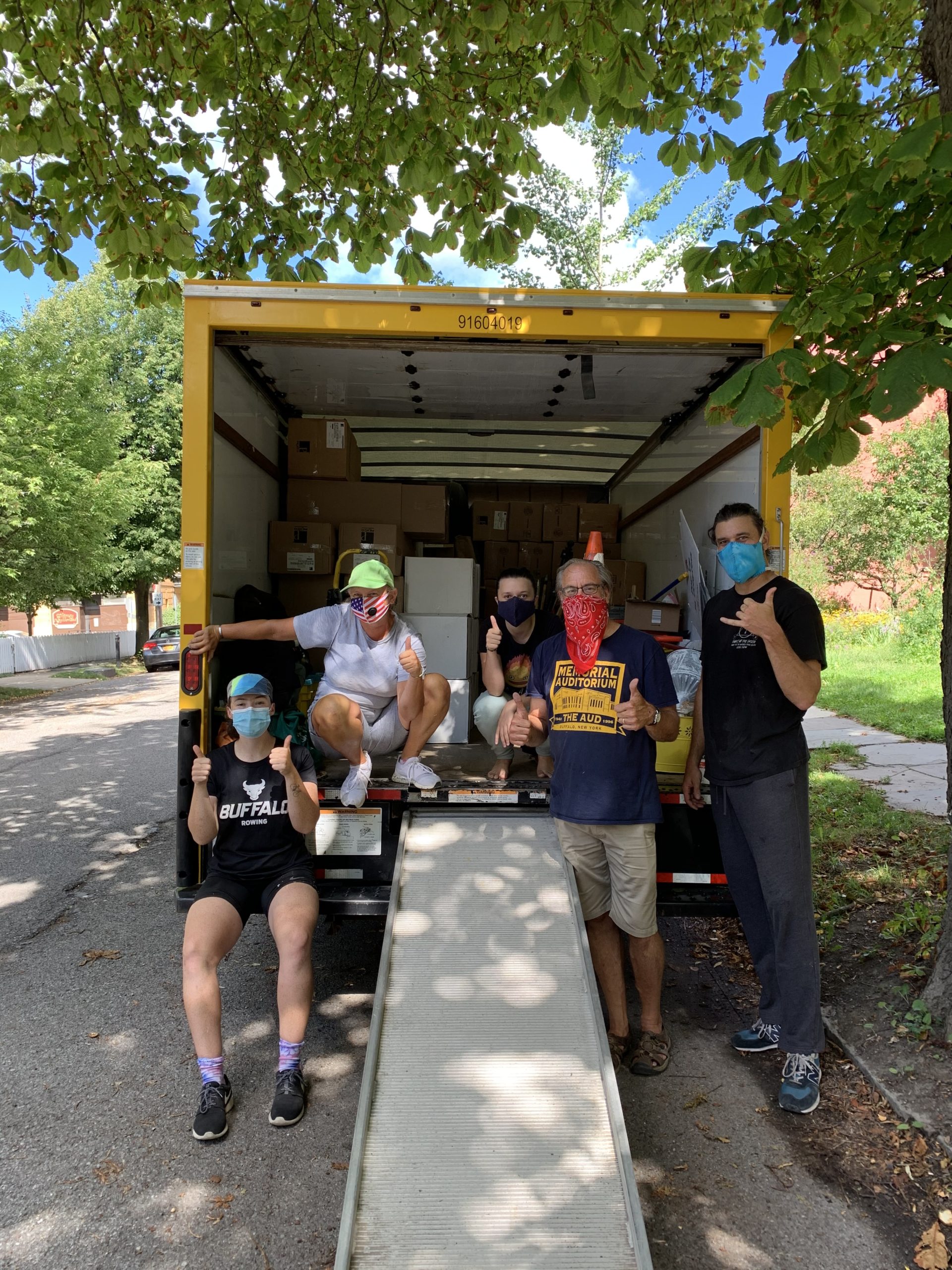 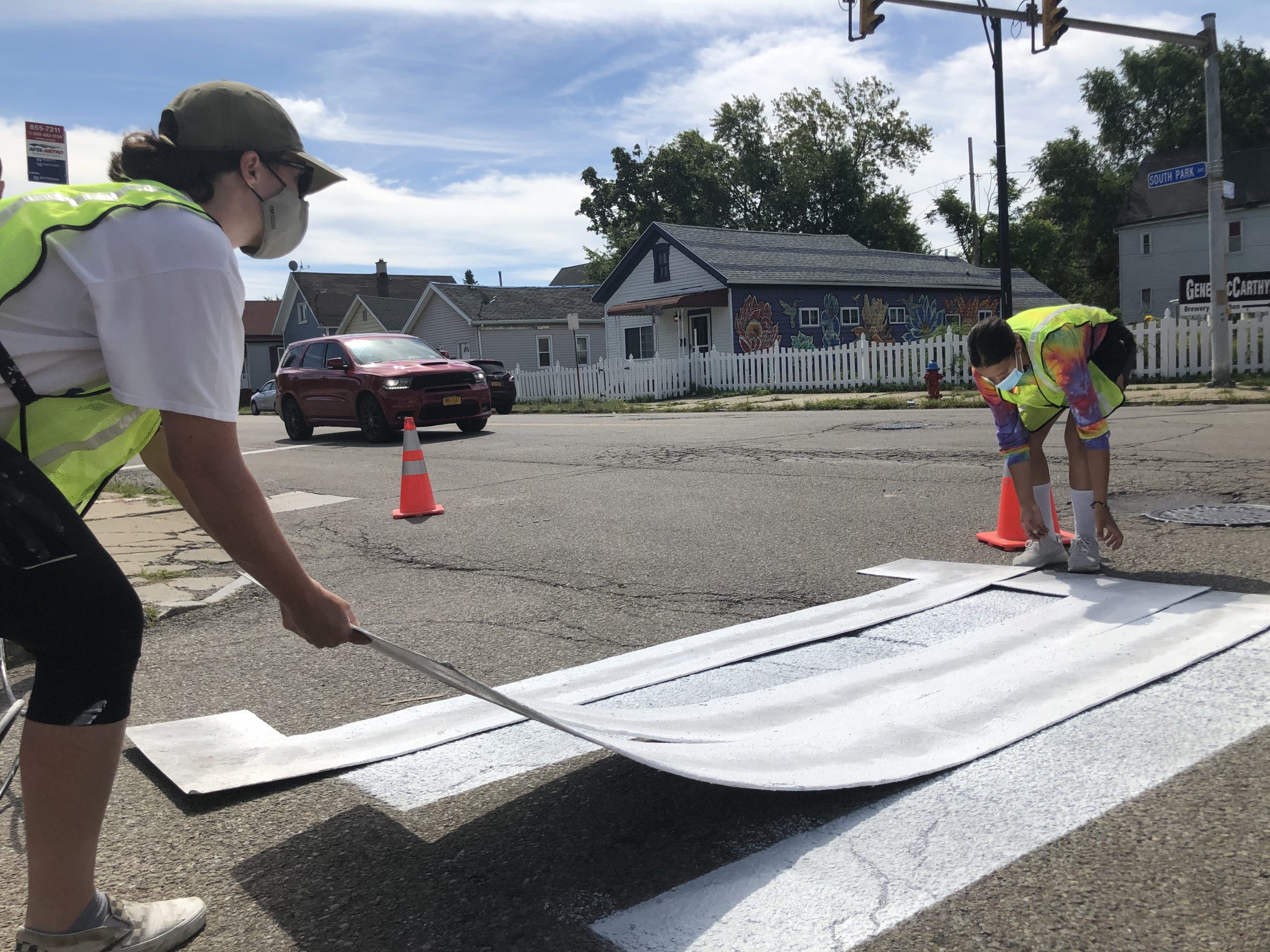 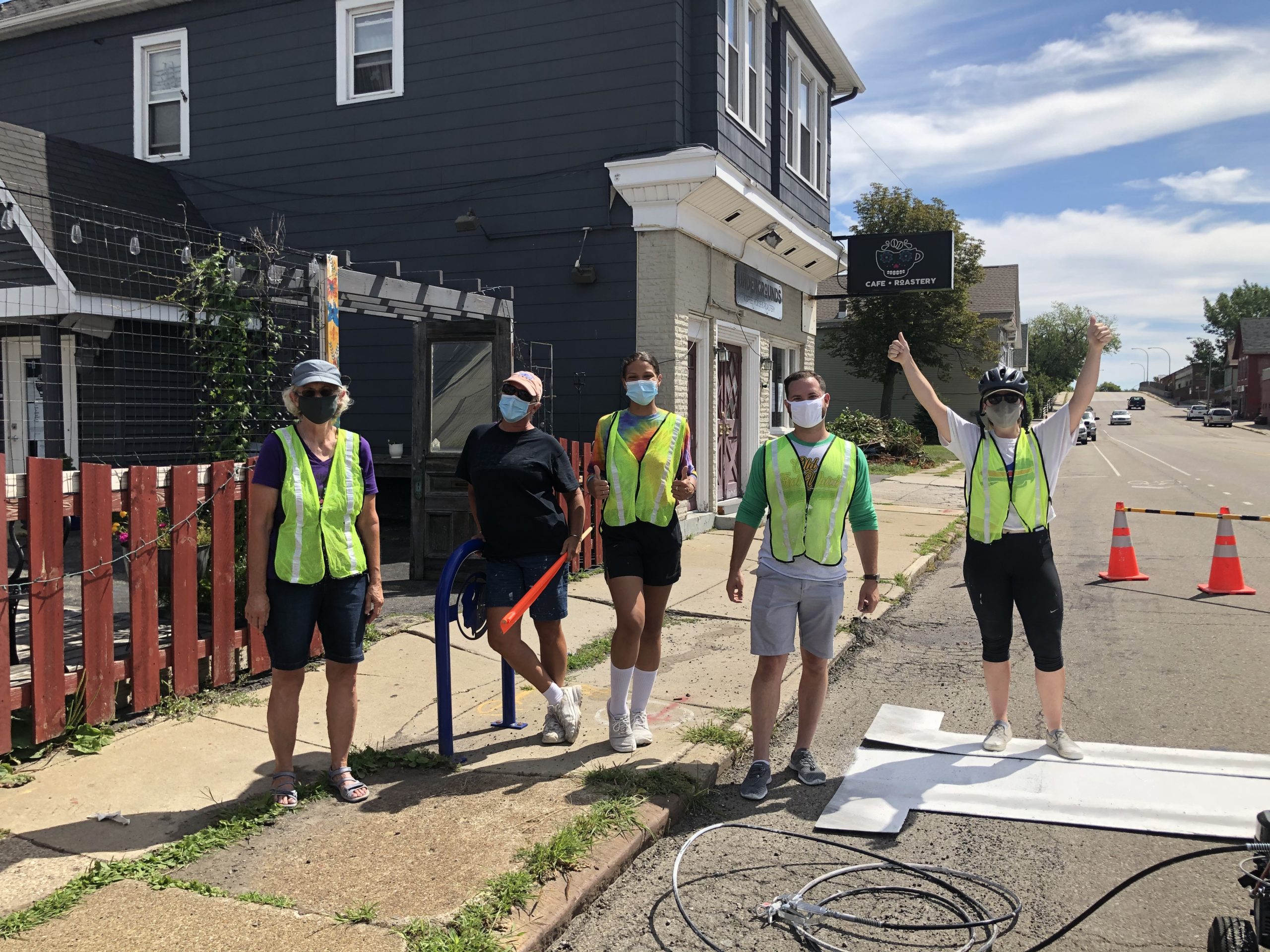 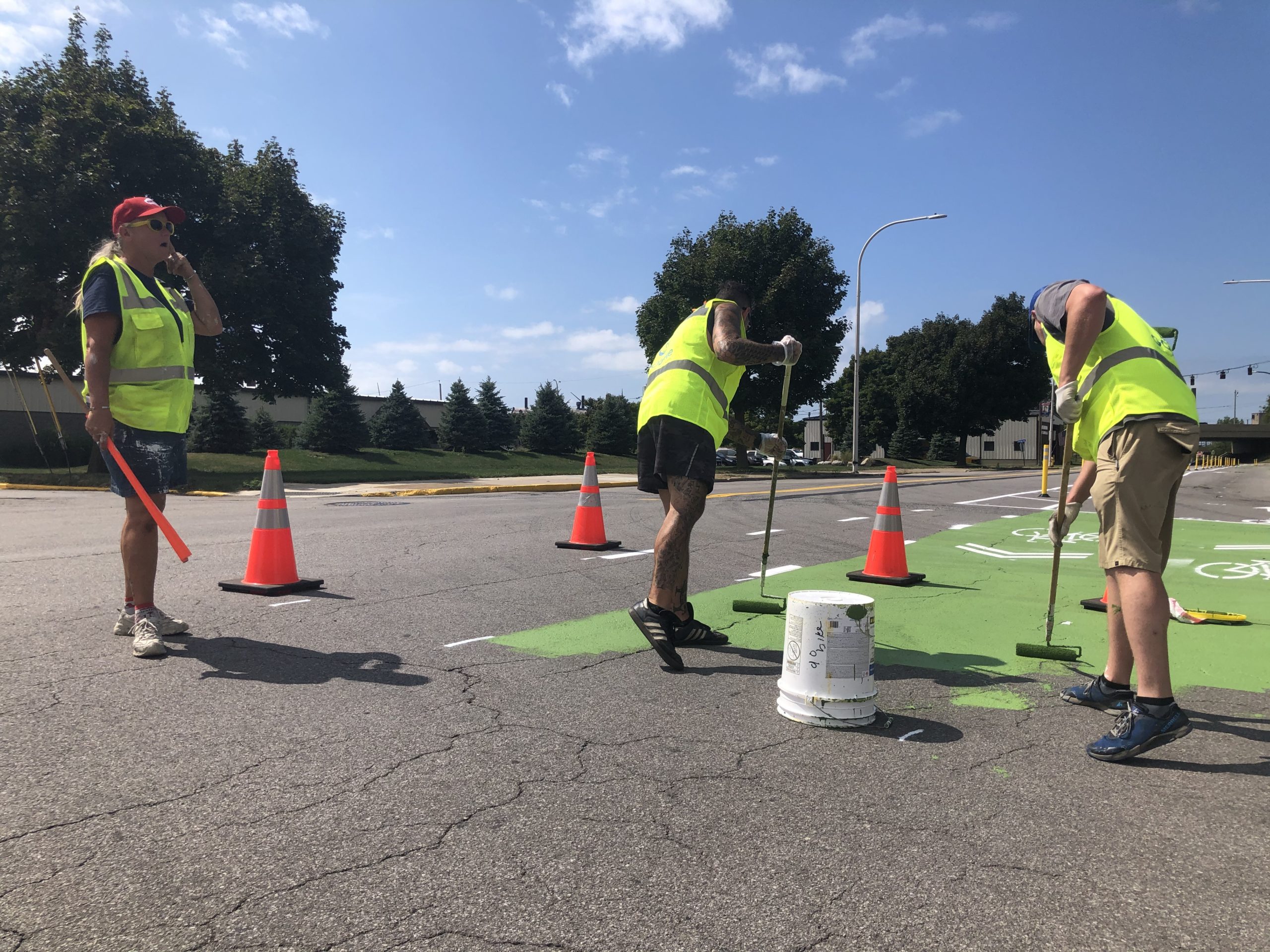