We are all pedestrians. Even if you drive for everything, you still walk to and from your car at some point. We all pay for curb and sidewalk infrastructure meant to hold people, not trucks. Every time someone bowls over the curb and accelerates its erosion, that’s our tax dollars wasted.

Earlier this month, our team sat down with newly appointed Buffalo Parking Commissioner Raymond M. Wagner. We had obvious concerns we wanted to address as his term began. 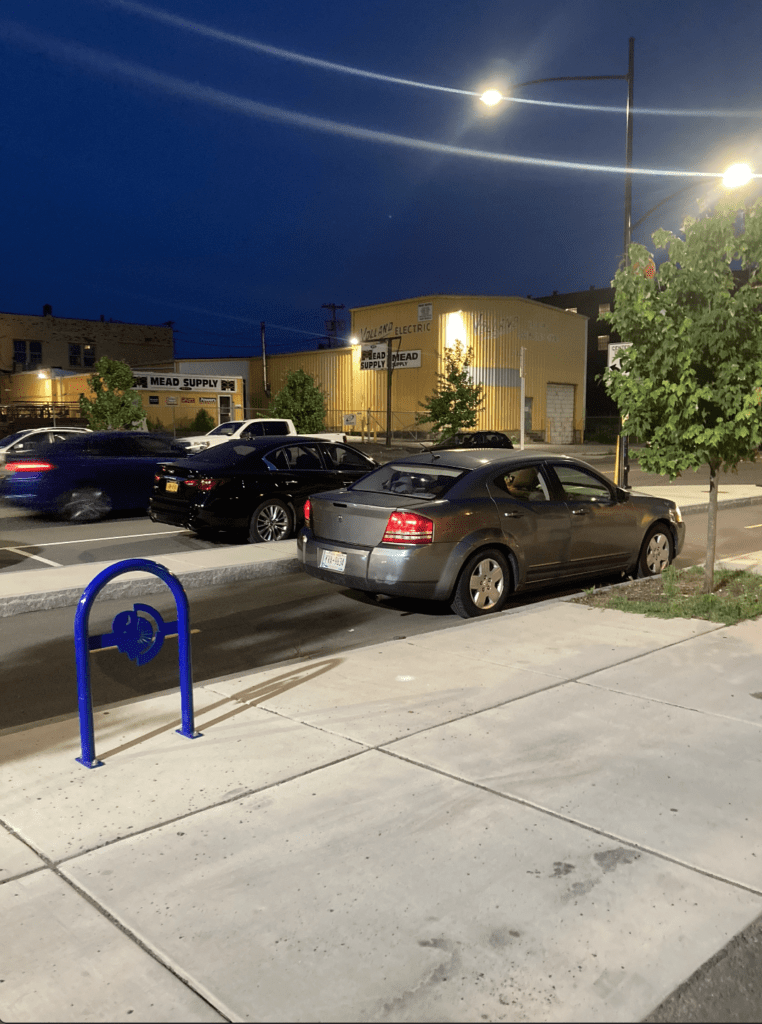 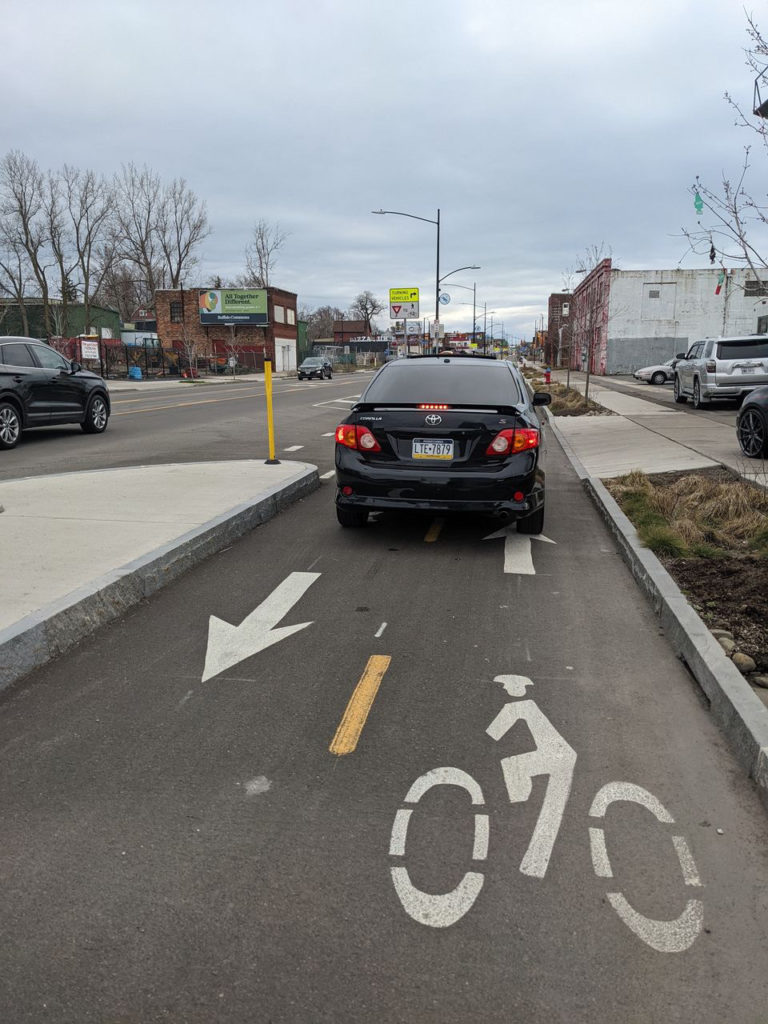 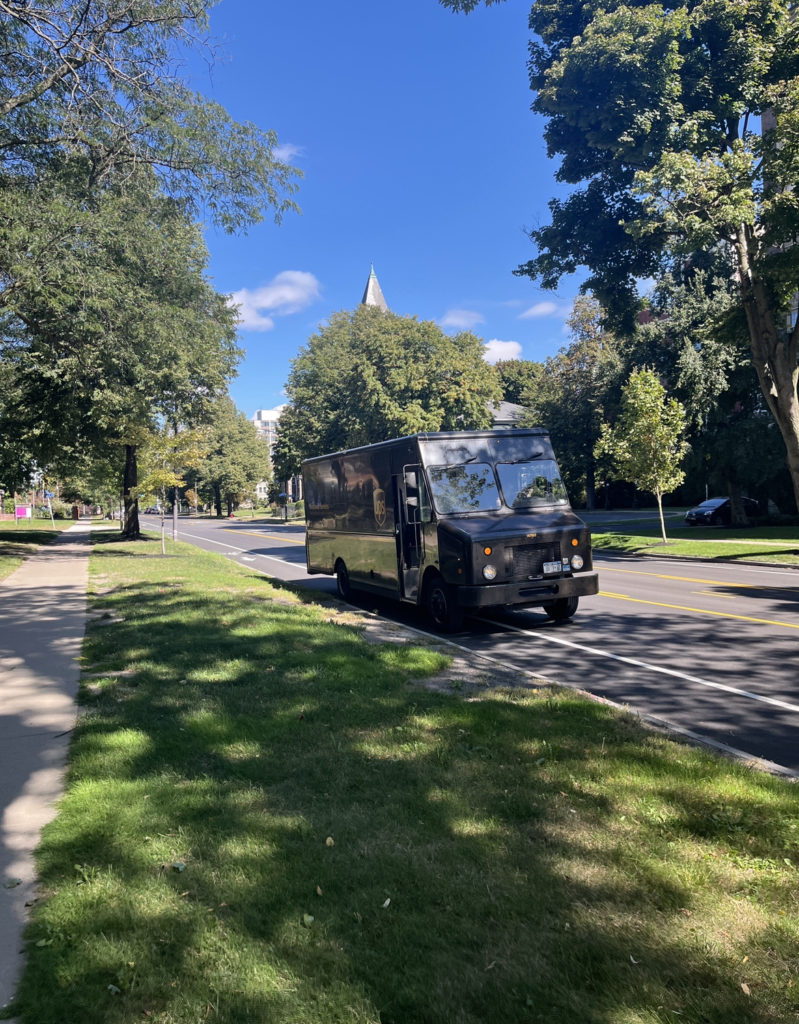 This summer, the Common Council and Mayor finally made parking in bike lanes illegal (along with standing in, idling in, and opening your door into a bike lane when a cyclist is approaching). Quick reminder: If you do stop your car in the bike lane, be it a shoulder lane or a protected lane, and a cyclist has to enter traffic to dodge your car, your delivery truck, etc, and is hit by a car, you can be held as liable as the car that hits the cyclist since you were breaking the law and contributed to the crash.

But we haven’t seen Buffalo parking enforcement ticket these violations. 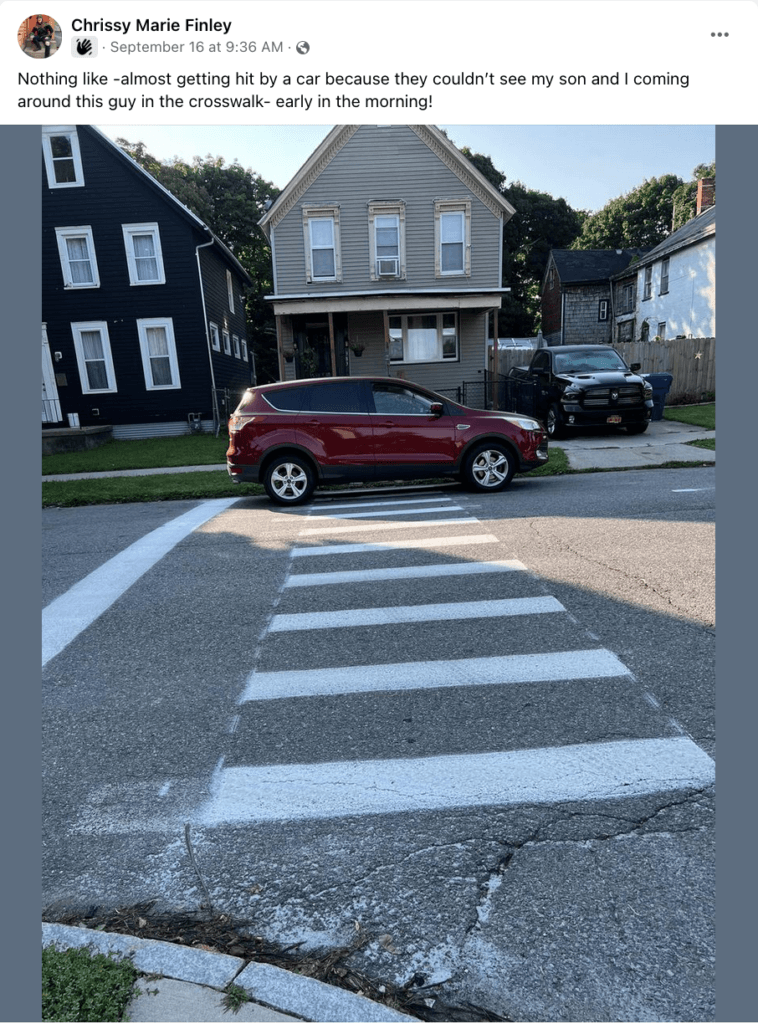 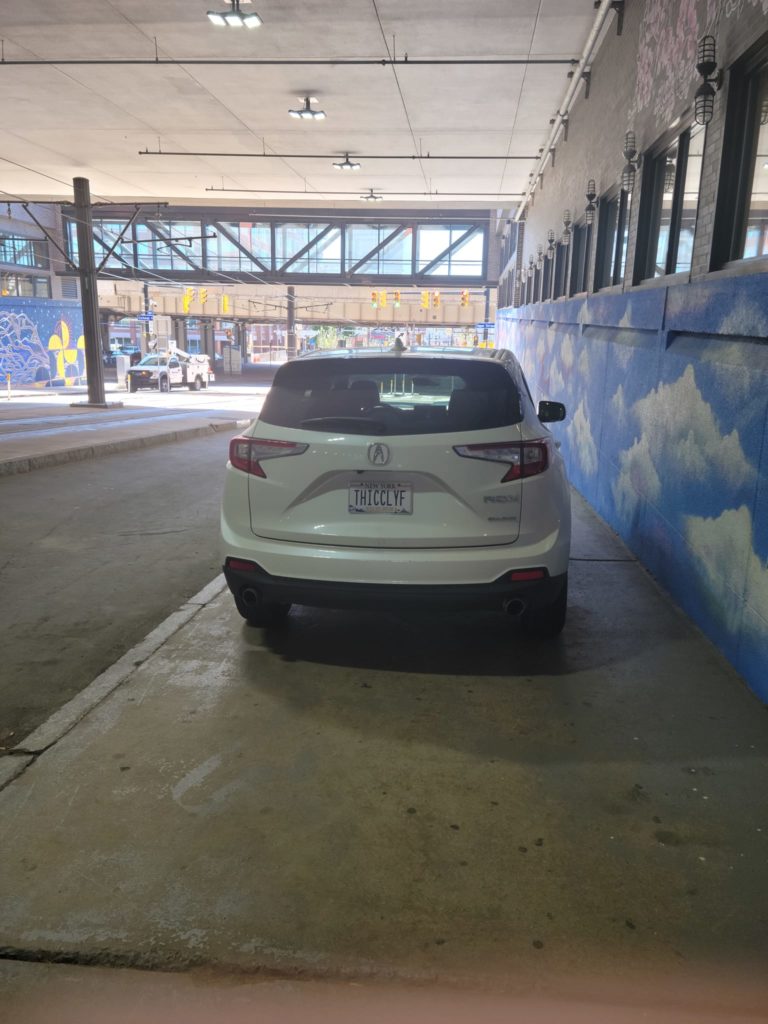 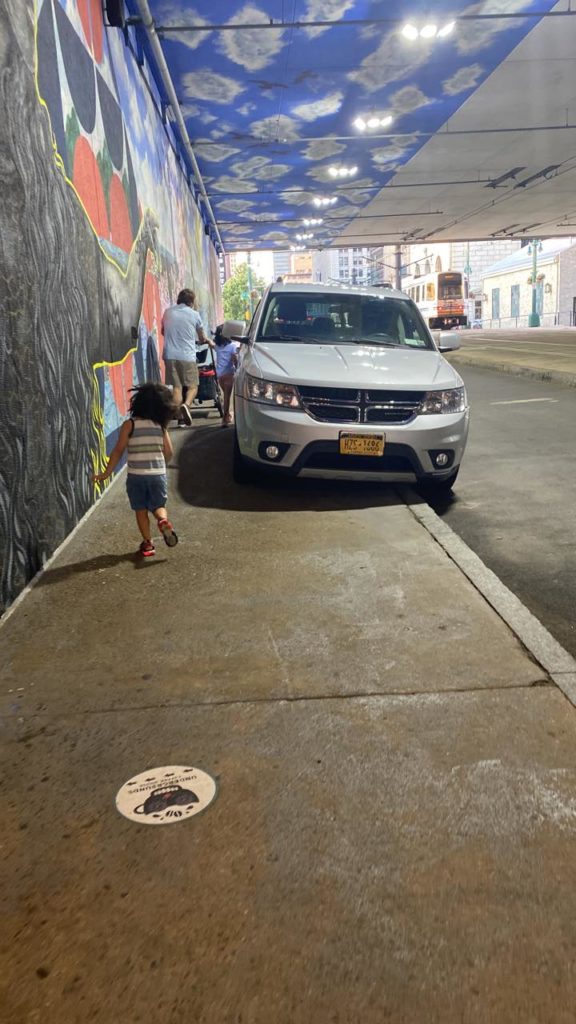 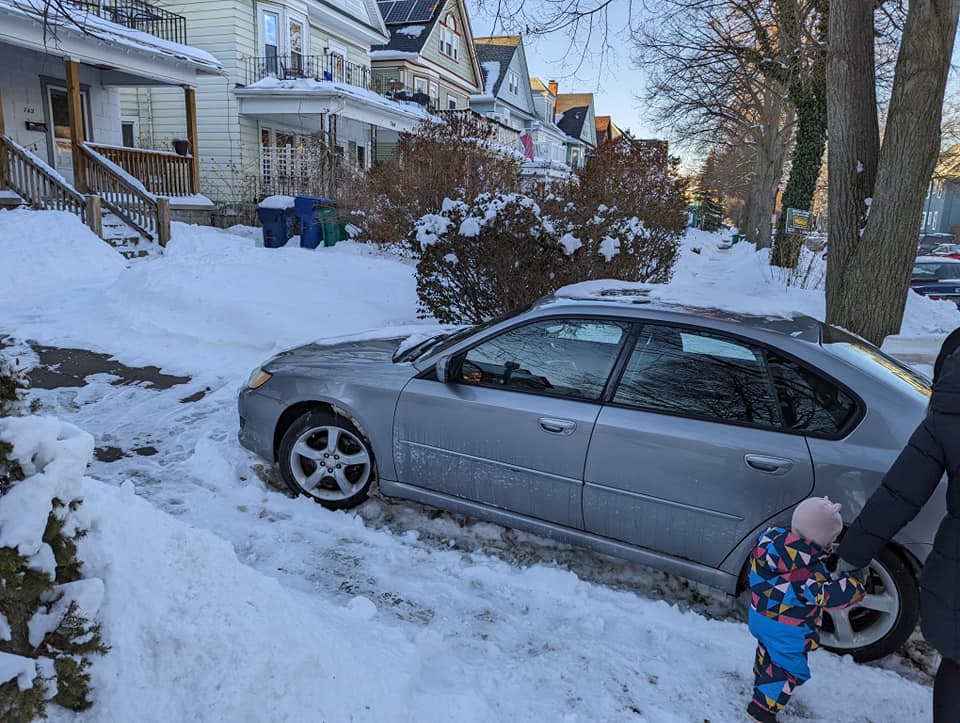 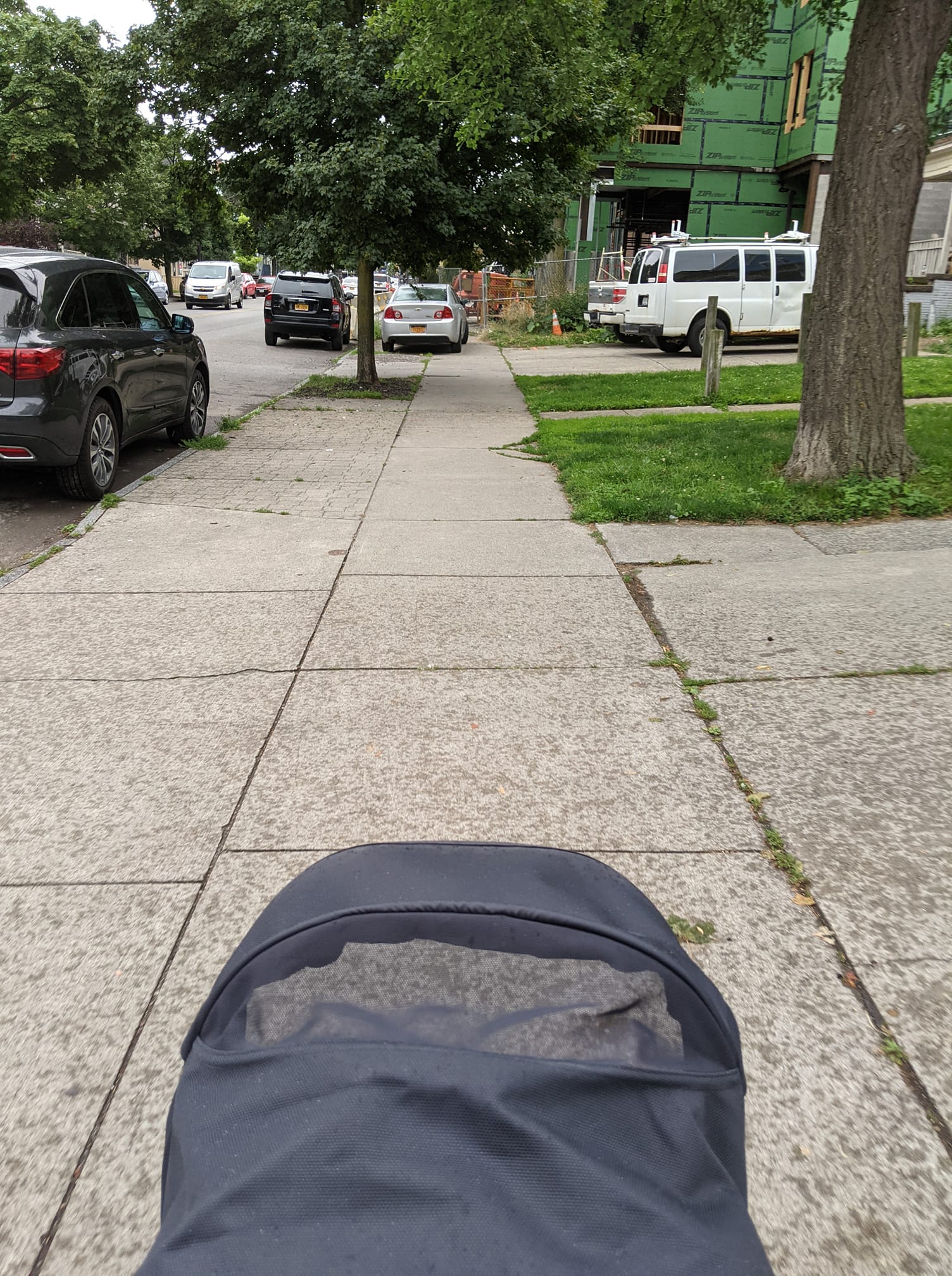 Not just bikes – we at GObike alongside residents around the city are also interested in seeing pedestrian space reserved for pedestrians, not for trucks. Just check out the Sidewalk of Shame – Buffalo group on Facebook to see how irate the broader city is becoming about all of the cars and trucks pulling up on the sidewalk when they don’t want to pay to park in the street like the rest of us, or walk a little further if there’s no parking spots directly outside the door. Or the cars that park directly in the crosswalk, disregarding people trying to use them to cross safely. The cars parked in driveway skirts, blocking the sidewalk in front of their own home and forcing their neighbors in wheelchairs or pushing strollers into the street with traffic.

Once again, these violations seem to get a free pass from Buffalo’s parking enforcement officers while cars caught on the wrong side of an alternate parking street are ticketed within five minutes of the posted time to switch.

Commissioner Wagner would like to use technology to curb these violations. He’s encouraging everyone to use the ‘Buffalo 311’ app (available for free on iPhone and Android) to take a photo and upload it to the app, which also allows you to briefly describe the violation and give it an exact geo-tag.   Now, we know this isn’t going to dispatch parking enforcement within minutes to try to catch the UPS truck blocking the bike lane on Delaware (UPS… Can you use the center lane like you do on Hertel, guys?) However it’s about data collection. Wagner promises that data will determine the department’s priorities. Using the app can ensure all the data is exact and allows you to more easily check in on resolutions to your filed complaint.

So if we want to get serious about getting cars and trucks off the sidewalk, out of crosswalks, and out of bike lanes, then we can’t just get mad when we see it, can’t just post our outrage to FB or TW. Whip out that phone and file a complaint. As the hundreds of complaints turn into thousands, Wagner will identify this as a priority and get his team to take action more often.   Hopefully, when the ticketing begins, folks will be motivated to go find legal parking, and the kids and adults in our city will have a safer experience getting around on foot or bike or wheelchair. 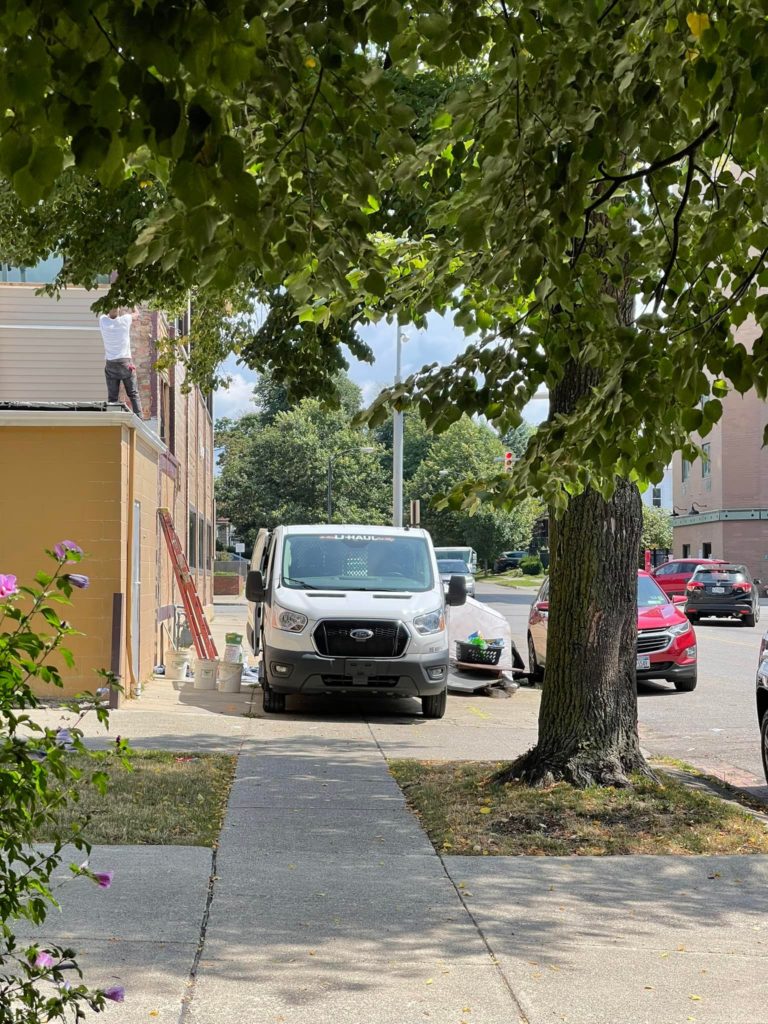 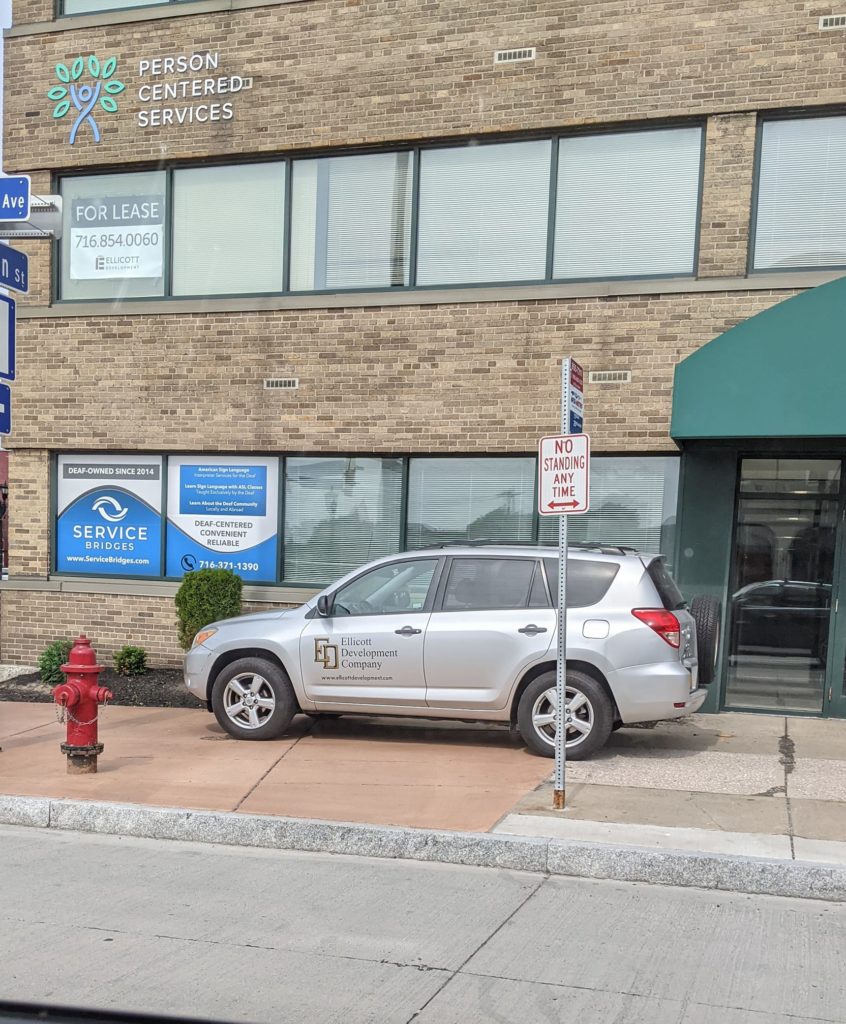 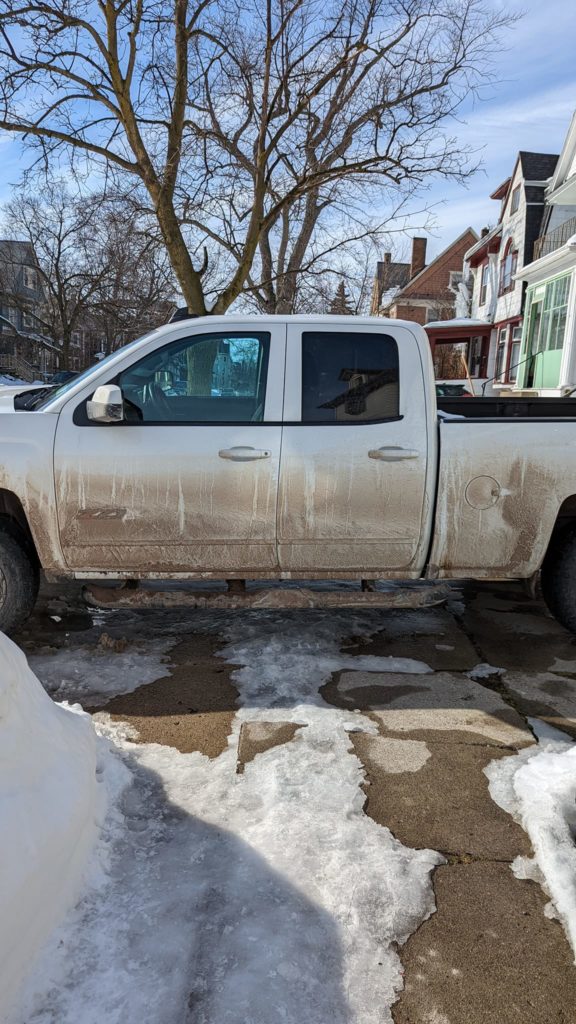 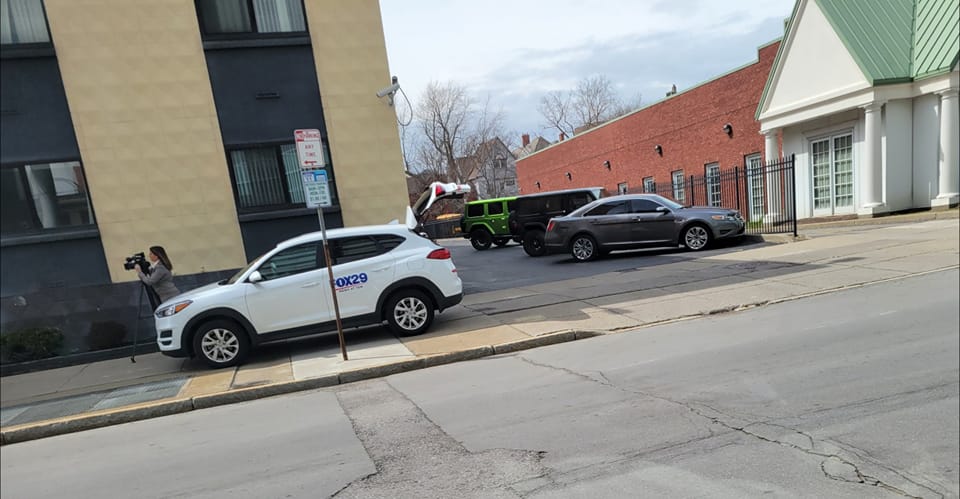 An extra note: There is always pushback from contractors who say they need their trucks to be within just a few feet of their workspace, which gives them the right to park up on sidewalks and block walkers. Wagner recognized this as well and says he is developing a permit system that would allow only the foreman on a project to apply for a permit for each job. That permit must be displayed on the dash of their vehicle while they park on a sidewalk, and no one else on the team would be issued the same permit. Those additional trucks would have to park elsewhere or be ticketed.

These are all items that we hope to solve through a strong, open, collaborative relationship with Commissioner Wagner and his team of parking enforcement officers who work through the city 24 hours a day, seven days a week. We’re rooting for him and this department. This is a city where nearly 30% of households don’t have a car, where roughly 66,000 children aren’t even old enough to drive, and thousands of other older residents have become too old to drive but can still walk around. We can design and maintain a city for all of us, not just for car drivers.   We hope you download the app today and report these violations often. Let’s have data lead the way in changing the culture in Buffalo. We’d like to thank Commissioner Wagner for his time, his interest in these issues, and his commitment to solving them. 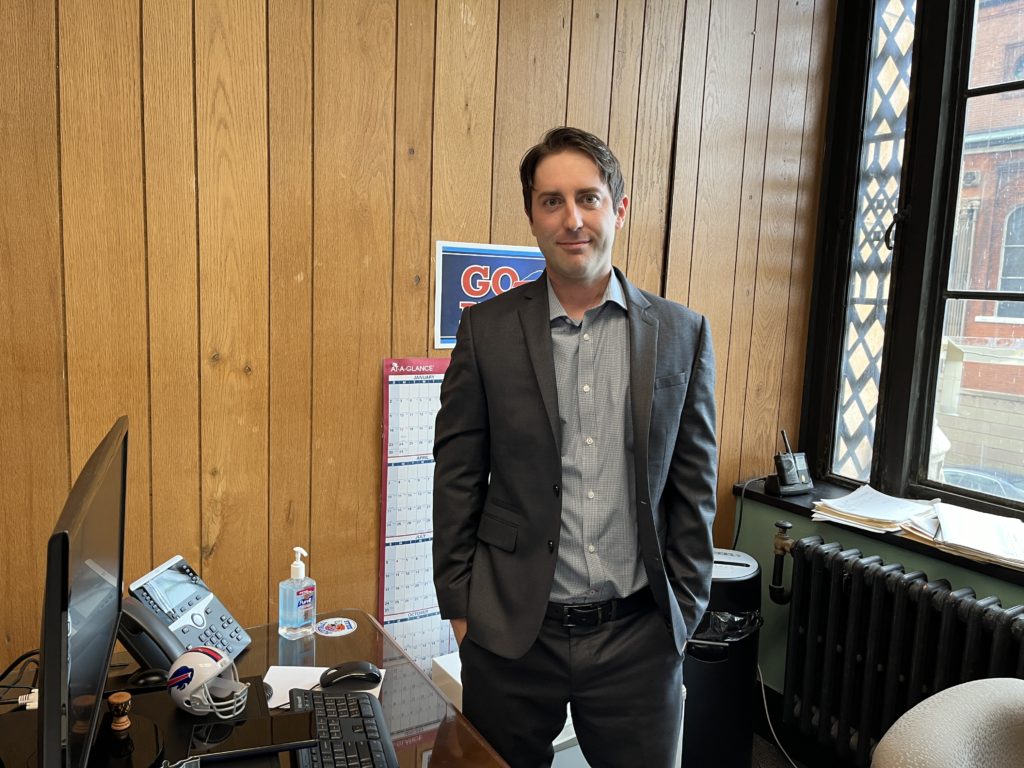