Here's what's going on in the city's construction projects that affect bikers and pedestrians.

GObike chairs the Bicycle and Pedestrian Advisory Board, which provides recommendations to the city on the implementation of plans, policy, and projects to ensure safe travel for all roadways users is considered. Not all transformations mean new bike infrastructure.

A board of the city council, the Bicycle and Pedestrian Advisory Committee is charged with the review of on-going and future infrastructure projects to ensure they best accommodate the needs of all roadway users including pedestrians, bicyclists, and people with disabilities. Meetings are open to the public and held on the first Monday of each month at 5:30 pm.

Farewell to these completed projects!

Main Street from Ferry to Delavan

This stretch of Main has been repaved and restriped with a road diet and bike lanes on the shoulder in both directions. Thanks to DPW for this upgrade here. Virginia Street from Main to Ellicott

This project widened the sidewalks on Virginia and Burton and created a one-way on Virginia between Washington and Ellicott for cars with a two-way for bikes. All that remains is getting light poles installed on Burton, expected in October 2021. 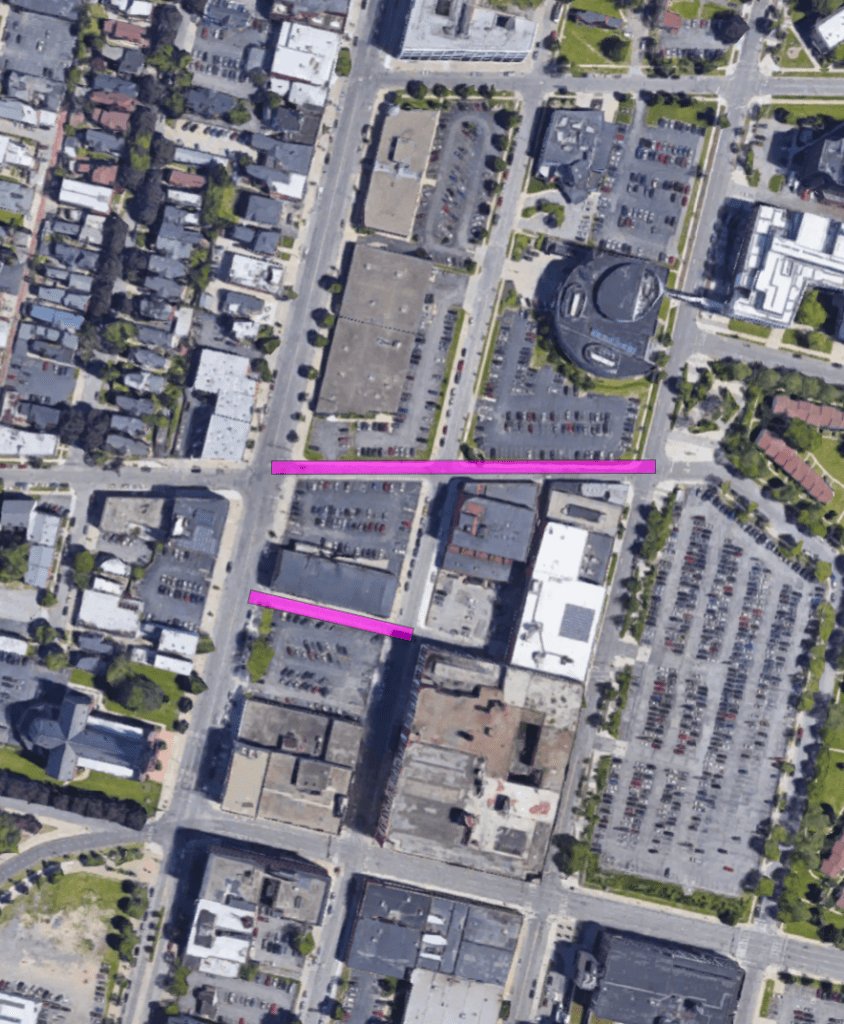 The Bike Ped Board wrote a letter to the city about the importance of this and it did get done! This stretch was repaved with fresh stripes for bike lanes on the shoulders. We’ve been advocating for some projects for some time, and to the city’s credit, they are giving them the proper publicity, attention, and seeking the public’s input.

Main Street from Goodell to Ferry has been in need of attention for a long time. It’s a speedway. And the city is seeking the public’s input on how it should be redesigned. Businesses have had a voice and so have residents and folks who walk, bike or drive. If you have not yet, take the survey they’ve offered about whether to create a protected 2-way cycle track, or to divide the lanes, both protected on each shoulder. (We like the division because as driveways are crossed, drivers will be looking left at approaching cyclists before they turn, which increases everyone’s safety.

This has notoriously been a dangerous intersection for pedestrians, contributing to the divide between neighborhoods and communities that Rt 33 and Rt 198 create. Construction has already begun as of October 3 to make intersections easier for pedestrians to navigate and to slow down some cars. When repaved a couple years ago, Buffalo’s DPW had signed off on adding bike lanes, but the striping has not yet occurred. Now, these projects have taken an additional step backward as DPW now says they have not identified funding to stripe these streets, which are each some beautiful avenues to bike along. 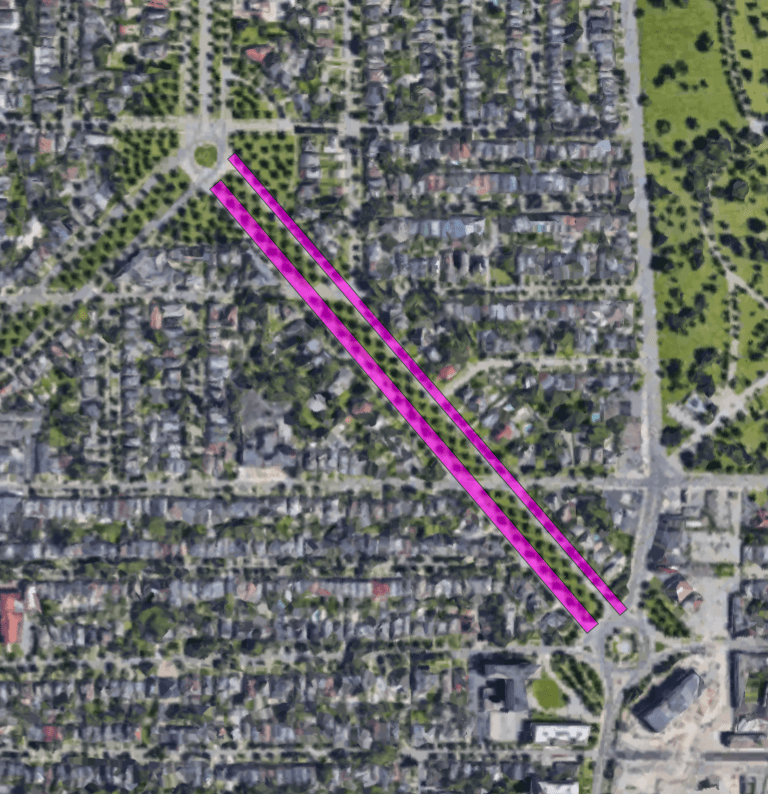 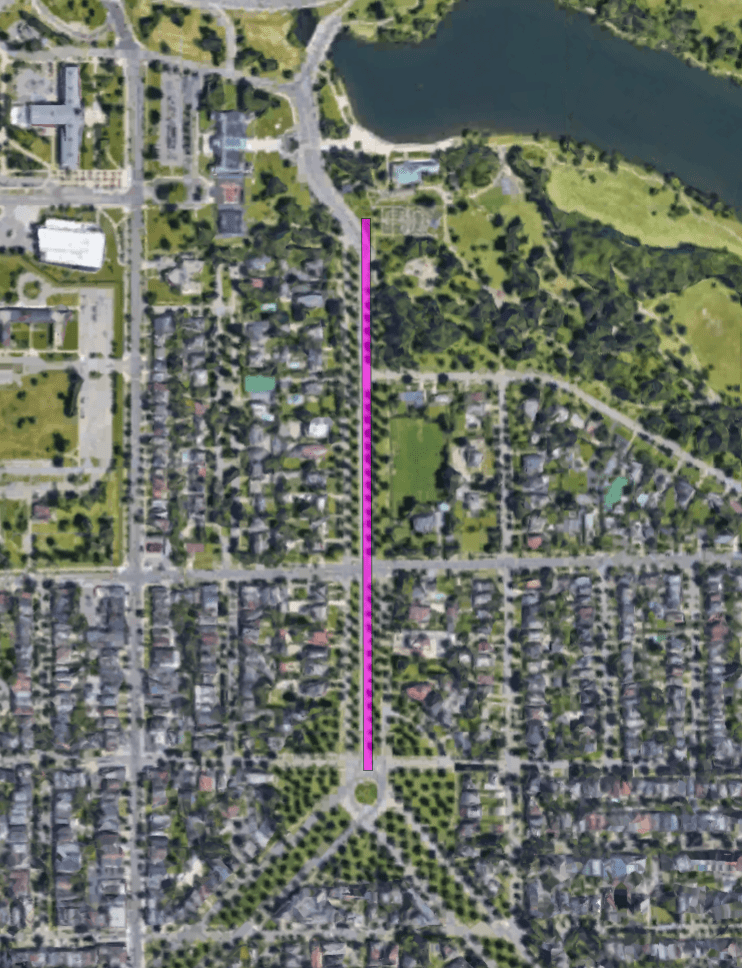 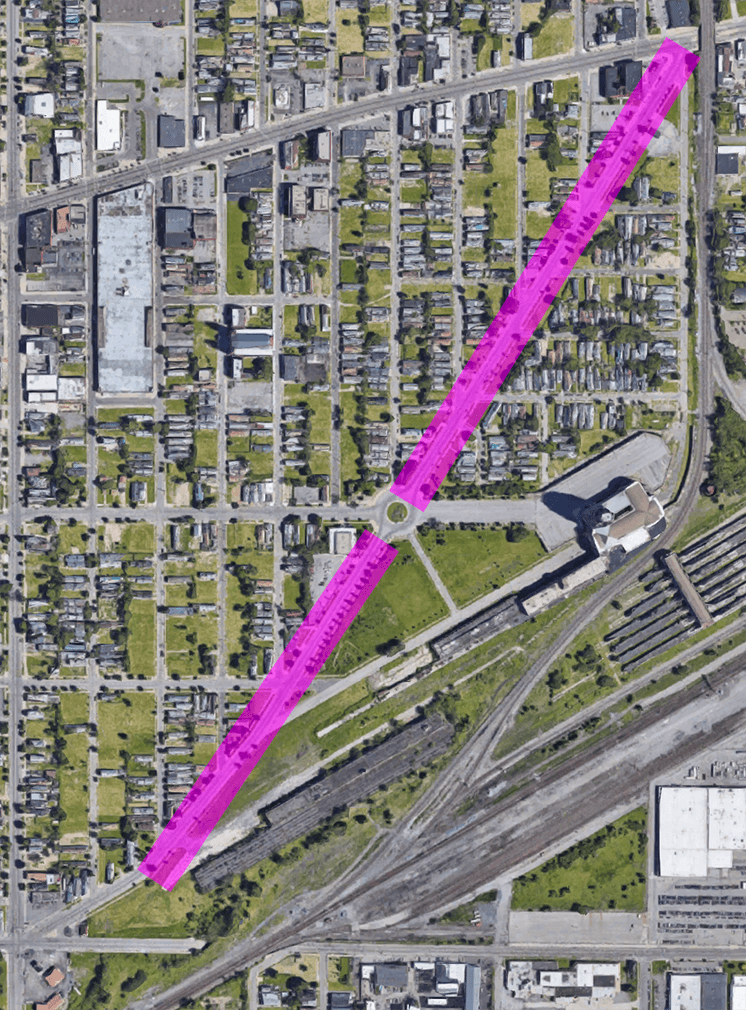 What else is going on? PLENTY!

Nearly complete. Majority of green paint in conflict zones is down. Signal testing continues. This route is to be plowed in the winter and that’s why there are no permanent bollards to keep cars from driving through it or parking it. There’s also currently no law in the city that prohibits a car from parking in a bike lane. We’re working to see that change and you can call your city council member to advocate, too.
For next season GObike continues to offer to install temporary delineators where the path crosses driveways. These would be removed in the winter, and would otherwise help to keep these paths free of cars. The city is considering it.
Riding this path, or any path in the city, and frustrated by glass, debris, or trash? You’ve got to call 311. This is a large city with hundreds of miles of roads and pathways. The more 311 calls received, the more likely it will be cleaned up.

Construction of the cycle track and narrowing of the road is currently underway, and should be complete by end of 2022’s construction season. Construction is ongoing today, and by the end of 2021, substantial completion is expected. 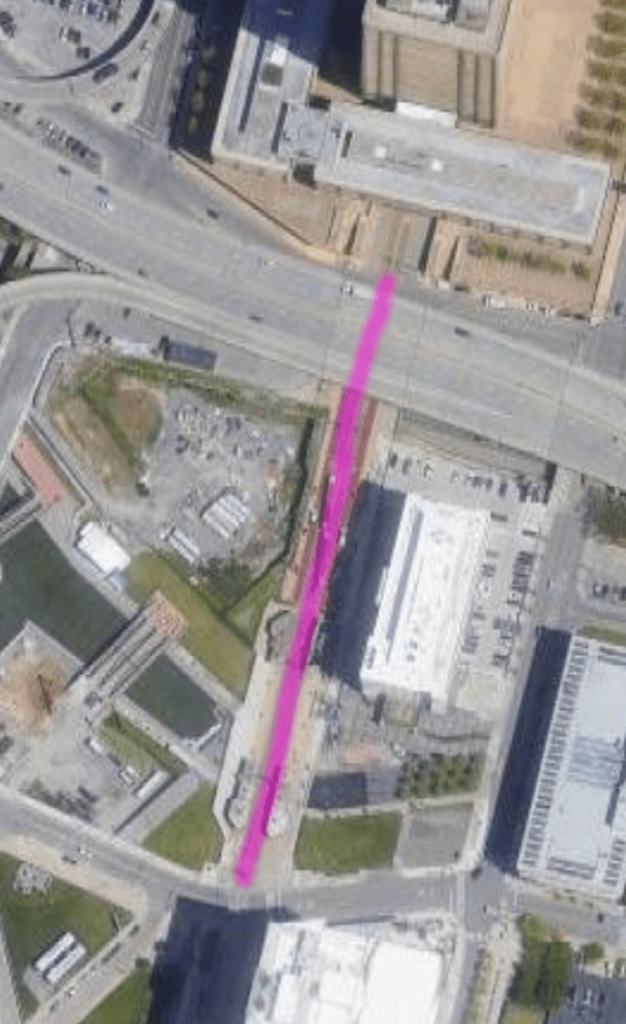 Final striping and signal pole repair to be completed by EOY 2021. 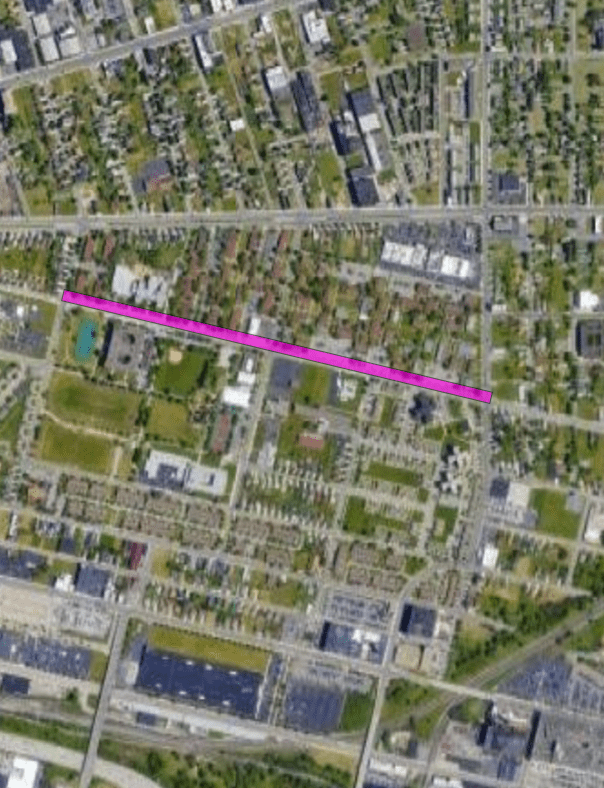 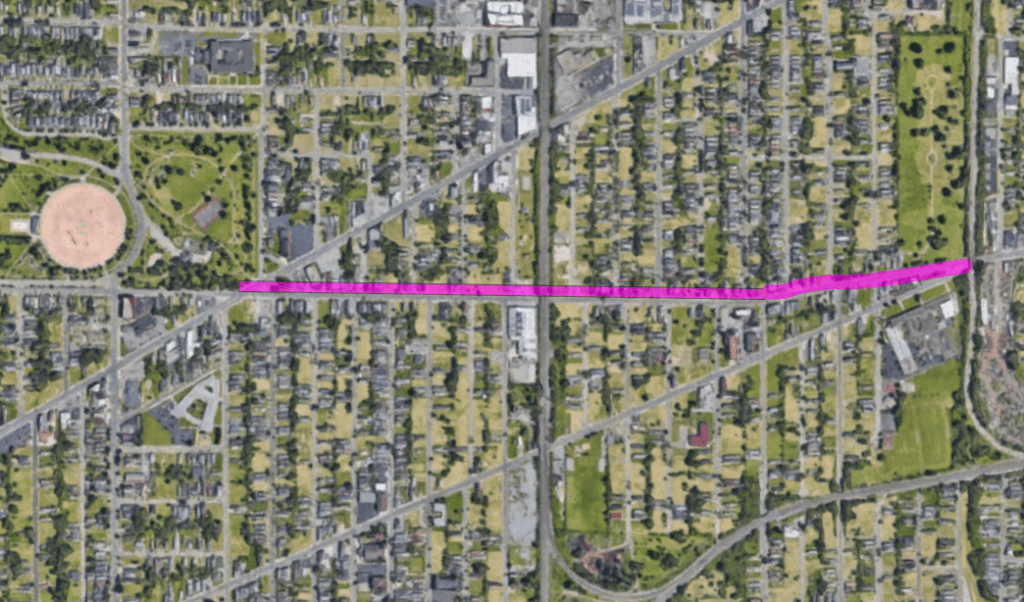 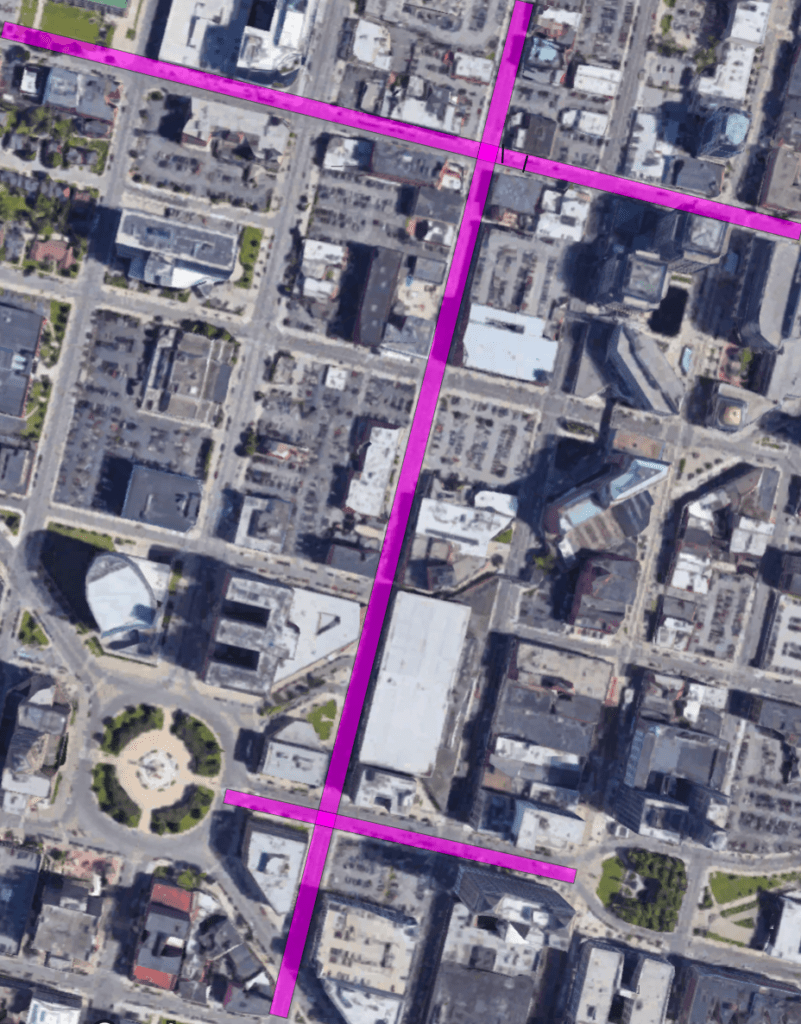 A repave is planned to kickoff this month, October 2021. 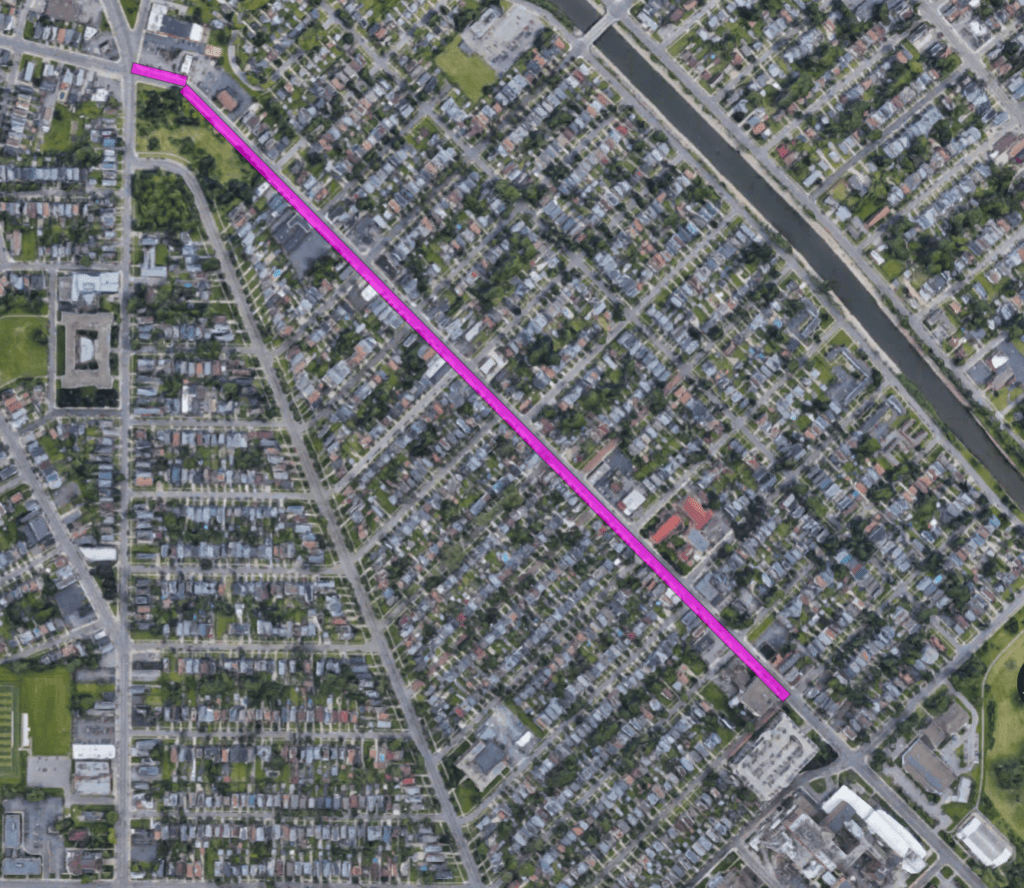 Construction is under contract. Will begin in construction season kickoff 2022.

Construction ongoing. The reroute that cars and cyclists have had to take to get to Outer Harbor, Ganson Street, will not be added to city-wide paving list until AFTER bridge is complete. 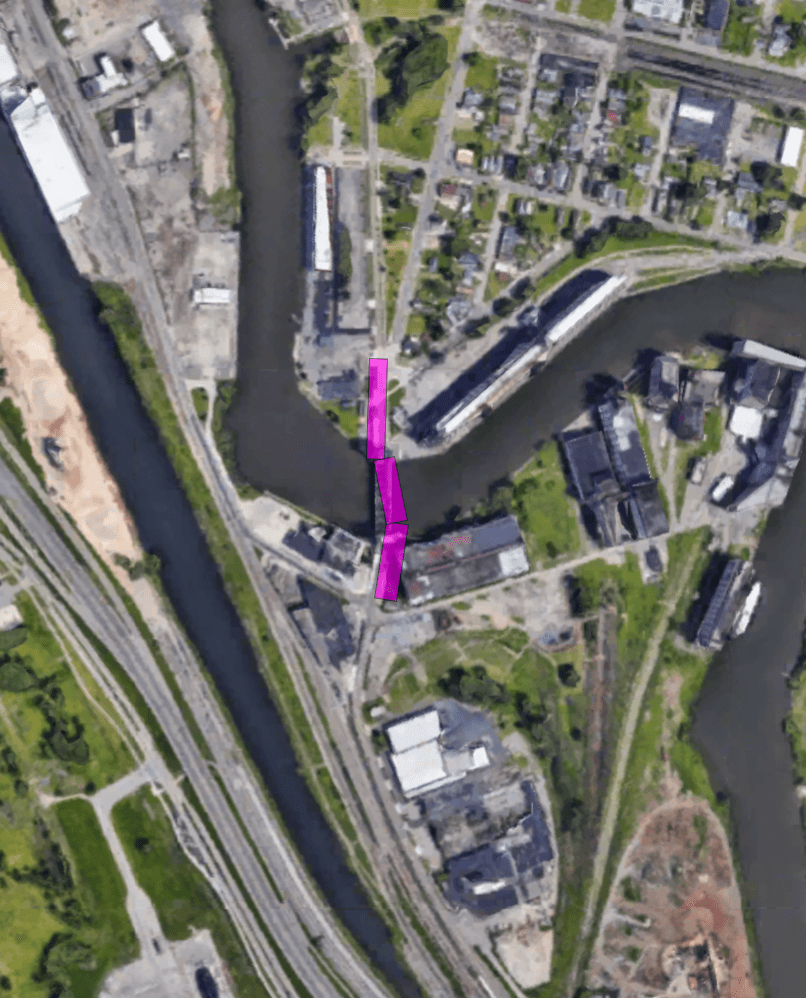 Construction is under contract and should commence before the end of 2021. 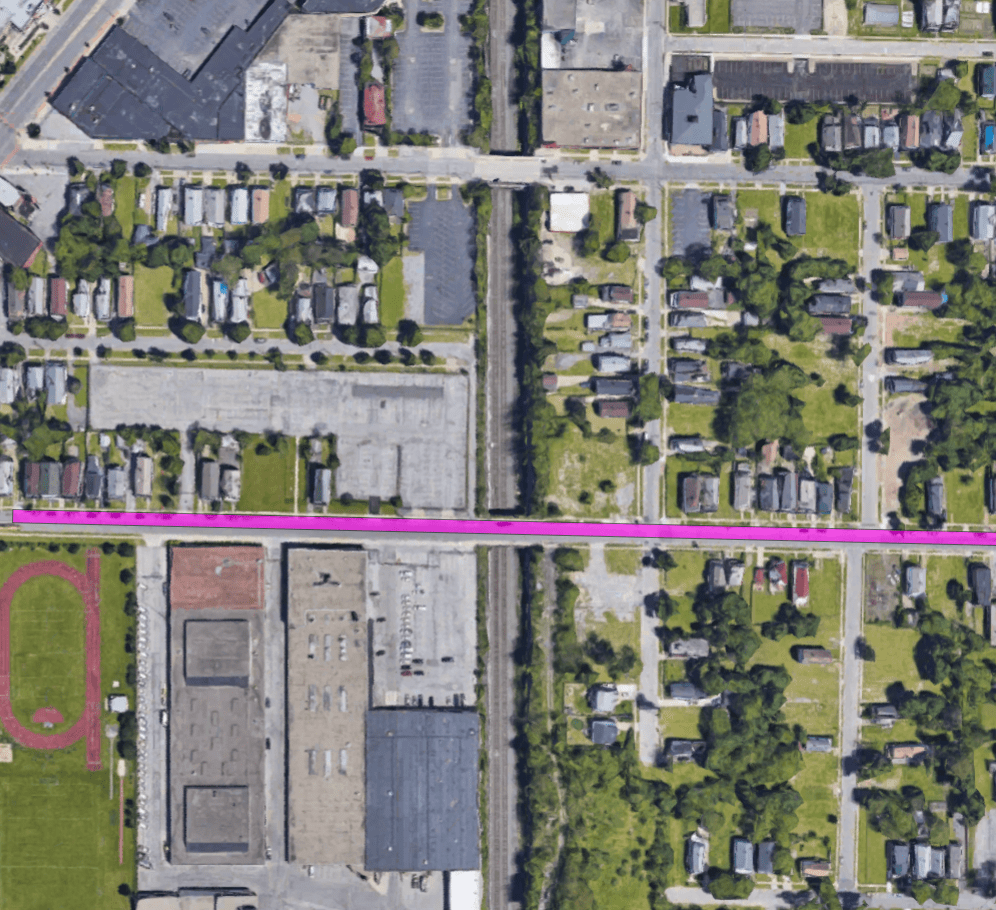 This project is currently in the design stage. This fall, utility work should begin on this street. A redesign for this street is currently in the design stage. 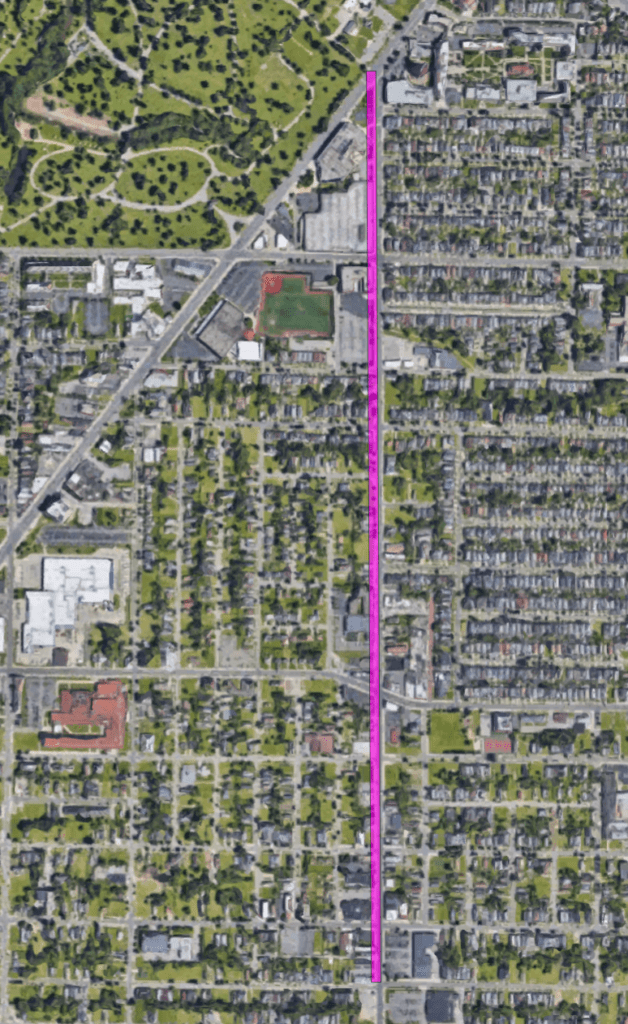 Niagara Phase 4 – B Hertel to Ontario
Niagara Phase 5 – Porter to Hampshire
Both of these projects are currently in the Planning stage (Prior to Design). Improvements to Busti Ave
This project is funded through a 2018 federal TAP. Design is ongoing. Bailey Complete Street – Phases 1-2; Winspear to Kensington
This project is still in its design phase.

Forest Ave. (Elmwood to Delaware)
This project is on hold until the building construction at Elmwood and Forest is complete.

Carolina St. (Niagara to Tupper)
The DPW needs to “Identify Funds” which means there currently is no funding set aside for this project. They’re also reviewing the project’s signage needs for bicycle contraflow. Main and Englewood Intersection
DPW intends to install a Rectangular Rapid-Flashing Beacon (RRFB) at the crossing of Main St at Englewood Ave in 2022. This crossing is currently uncontrolled and has a history of pedestrian incidents. A bump-out will be installed within the parking lane on the west side to improve sight lines and a pedestrian refuge (with supplementary RRFB beacons for the inner lanes of traffic) will be provided at the current median location. As of October 4, scheduled to begin ADA ramp improvements ahead of paving. Bailey (Elk to Clinton) & Virginia (Elmwood to Main)
As of October 4, scheduled to begin ADA ramp improvements ahead of paving. Striping of bike lanes to follow as part of Bike Master Plan.