The results are in: The project is working.

What events triggered a need for this project?

The West Village neighborhood is nestled between the central business district and Niagara Street. It has city, state and national historic designation status. While mostly residential, it includes Hutch Tech HS and Evergreen Health which are both destinations for people from outside the neighborhood. Being adjacent to downtown, there is also a heavy influx of vehicles that enter the community in the morning, that park along neighborhood streets during the work week and use it as a cut through in the afternoon to return to I-190 via the Virginia/Carolina/Niagara street ramps. The majority of the streets in the subject area are one-way.

This traffic calming project aimed to minimize the negative impacts of parking illegally, driving under the influence of drugs, running stop signs, and speeding. Over the summer, the situation had become untenable. Many neighbors had found the simple act of crossing the street on foot to be difficult and unsafe. Through calls to City Councilmember Nowakowski and meetings with Evergreen Health, one of the identified solutions was for Gobike to address transportation behaviors and improve safety through design. 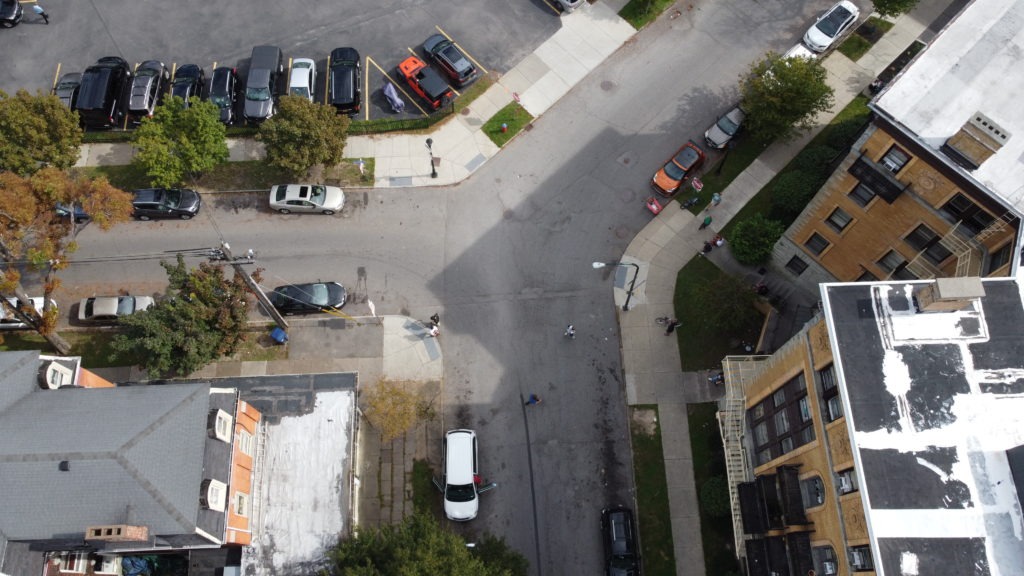 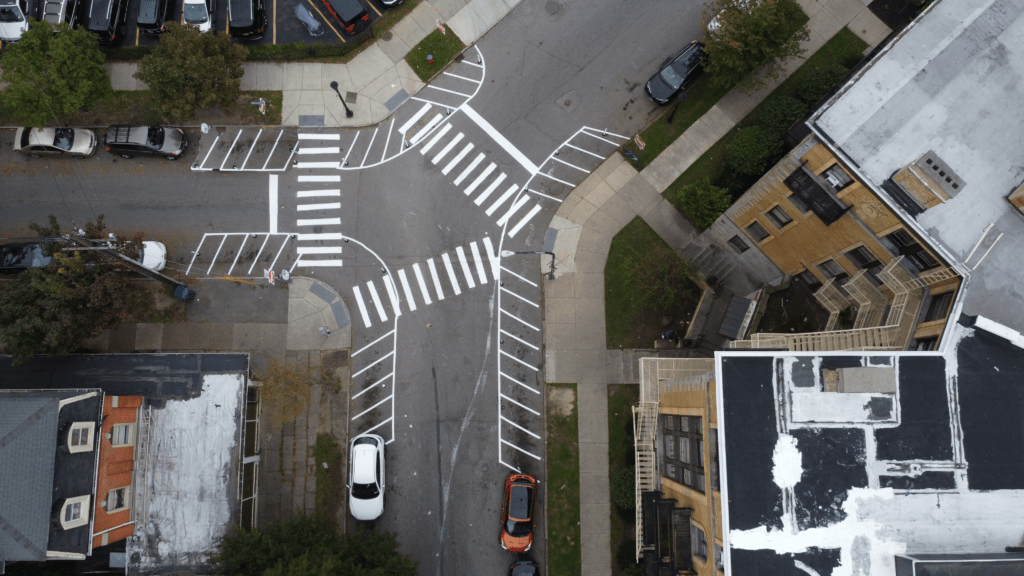 What did we implement?

With funding support from both Councilmember Nowakowski and Evergreen Health, GObike’s Complete Streets Engineer Jim Jones developed a simple design solution for a quick build project that added painted bump-outs (artificial extensions of the curb) with bollards (flexible plastic poles lining the perimeter of those bump-outs) at the intersections to reduce pedestrian and vehicular exposure distances (the distance from safe zone to safe zone was decreased for pedestrians) and also reinforce restrictions to vehicles from parking within 20 feet of the crosswalks (that is the legal requirement) and added crosswalks and stop lines that had never been present in the neighborhood.

Considering all the streets are wider than is necessary for a one-way street, we also included a contra-flow bicycle lane to improve bicycle safety considering the estimated 86 bicyclists that use Prospect Ave is daily (2019). This allowed us to narrow the travel lane to 11ft at the intersections, which is targeted maximum lane width in the City of Buffalo. That’s right. 11 feet is all a car needs. After presenting the design to the community and providing people with the ability to provide feedback, the designs were submitted to the City of Buffalo’s Department of Public Works for review by their engineering department to ensure all standards were met before issuing a permit for installation.

Due to pushback from neighbors (see below) what we did not follow through with was narrowing all lanes to 11ft in order to implement the originally-planned contra-flow bike lane.

What did the community think?

There was immediate push back. The concerns raised from neighbors either through the project website or during on-site conversations with residents include:

However, we anticipated each and every one of these concerns, and we have responses to all of them on our project web page, here.

But what else did the community think?

But why is this temporary?

Most of the work we do is temporary. GObike creates a first step by using paint and temporary delineators/bollards that will be removed or fade within 1-2 years. While they’re in action, we get a boatload of data that we can then share with the city and neighborhood about how well they worked or did not work.

Then it’s up to the residents of the surrounding neighborhoods, and anyone in the city who’d like to see these changes made permanent with secure bollards, heavy duty paint and concrete extensions of curbs, to contact their city representatives consistently and often to turn it into a priority on the city’s public works agenda. Without that community involvement, no permanent changes can be made.

A speed study was conducted on Prospect Avenue between Georgia and Carolina from Monday October 11 to Wednesday October 20, 2021; a total of 8 days, 22 hours and 13 minutes. Prospect Avenue is a one-way street heading north. It is 36 feet wide with parking on both sides of the street. The block is 700 feet long. Speed data prior to the intersection treatments is not available.

Apart from Rabin Terrace, which is a two-way street, Chippewa, Georgia and Prospect are all wide (36’) one-way streets. After removing parking lanes (8’ on either side of the street) these neighborhood streets have 20’ wide travel lanes. The American Association of State Highway Transportation Officials’ (AASHTO) Green Book offers substantial flexibility regarding lane widths, allowing a range of between 9 and 12 feet depending on desired speed, capacity, and context of a roadway (2011, p. 4-7). While 12-foot lanes have been used historically as motor vehicle travel lanes, the AASHTO Green Book allows 10-foot travel lanes in low speed environments (45 mi/h or less) (2011, pp. 4-7–4-8). Thus, the excessively wide travel lanes in the neighborhood are out of context, do not meet federal, state and local design standards and contribute to the excessive vehicle speeding in a neighborhgood with high pedestrian and bicycle counts.

Utilizing design to influence driver speeds is important because as motor vehicle speeds increase, the risk of serious injury or fatality for a pedestrian also increases. Also, motorist visual field and peripheral vision is reduced at higher speeds. At 20mph pedestrian fatality and risk of serious injury is 18%, at 30mph it is 50% and at 40mph it is 77%. (AARP Impact Speed and a Pedestrian’s Risk of Severe Injury or Death 2011)

Please keep your eyes peeled for our surveys and take them more often.

A survey was conducted to better understand people’s experience with the temporary traffic calming project and how it may have impacted them. The survey was available online through the project’s webpage and was distributed to Hutch Tech HS, Evergreen Health, Councilmember Nowakowski and to a neighborhood email list which reaches 58 residents. The response rate was low with only 22 people completing the survey. The majority were women (55%) and predominantly white (72%) in  the 30-39 age range (31%) and travel in the neighborhood daily (86%) because they live there (86%). Key findings from the survey include:

Whether young or old, out of choice or necessity; there is a significant population that does not drive in the community and these vulnerable roadway users are more susceptible to injury with over 18 vehicles a day exceeding the speed limit.

The majority of residents feel the project has made it safer to cross the street and that vehicles are now less likely to illegally park.

Due to the wide travel lanes, vehicle speeding is still an issue as are rolling stops and crosswalk encroachments.

Despite this effort helping many, some cars had to drive slower and were angry about it.

Typically, drivers who use single occupancy vehicles as their primary mobility choice, vocalize negatively about changes perceived to lower speed or impede free flow travel conditions while vulnerable users such as pedestrians and bicyclists appreciate efforts to balance their movements.

The project’s primary detractors came from Rabin Terrace, where they are less likely to regularly experience excessive speeding on their street because it is two-way with narrower travel lanes, lower traffic volumes and is not a cut through to reach the expressway.

1 – Refresh the crosswalks next year.

2 – Make the bump-outs more attractive by utilizing artists to paint them (like Albright Knox and Buffalo Niagara Medical Campus did with us on Ellicott Street this year), adding planters or other elements to improve the attractiveness of the new pedestrian spaces.

3 – Install the bicycle facilities next year to narrow the travel lanes and identify other measures to slow vehicles down between blocks such as identified in the City’s Slow Streets program.

4 – Work with the Councilmember and city’s public works department to identify resources to add permanent curb extensions and ADA compliant curb ramps. (This is, again, where we need your help.)