Tim White is a local bike courier. He delivers fresh produce via cargo bike for a local business called FreshFix. He also rides for Queen City Couriers, a new local startup courier company. Tim is proof that courier services can be done and are in demand in Buffalo. We sat down with him to get a little insight into what it’s like to do business on a bike.

GB: Tell me a little about yourself.

Tim:  I came to Buffalo for a degree in photography at UB. Then traveled the country for about a year and then ended up sticking around in Buffalo for the last 14-15 years. I’m from the Ithaca area, and when I lived there I drove everywhere. School, work, and home were all half an hour commutes to each other. When I came to Buffalo, it was nice, because I was like, “Oh, wow, there’s like a little bit of transit here!”  Definitely more than Ithaca. It seemed like I could probably get around without the car. Then my car broke down and I couldn’t afford to fix it. I just got a cheap bike at Ricks and was like, “Lets see what happens”.  Since then, around 2008, I haven’t driven a car. But in order to do that I have always had to position myself to live in neighborhoods where it’s viable to do that.

GB: How did you hear about FreshFix?

Tim: Well, at first I was doing food delivery by bike. I started that around November 2019. I stopped doing that because early in the pandemic I got really sick. I think it was my constant contact with the community, going into restaurants and biking around constantly and what not. I stopped doing food delivery cold turkey, but knew that I had to find a way to make a living.

Then I reached out to FreshFix because I was already subscribed to their service. I knew I could figure out a way to do it by bike. Thankfully they gave me the opportunity to try out the deliveries entirely by bike. Now a refrigerated truck pulls up to my house every Wednesday. During the peak season, I delivered about 40 tomato boxes worth of produce around Allentown and the lower west side each Wednesday. 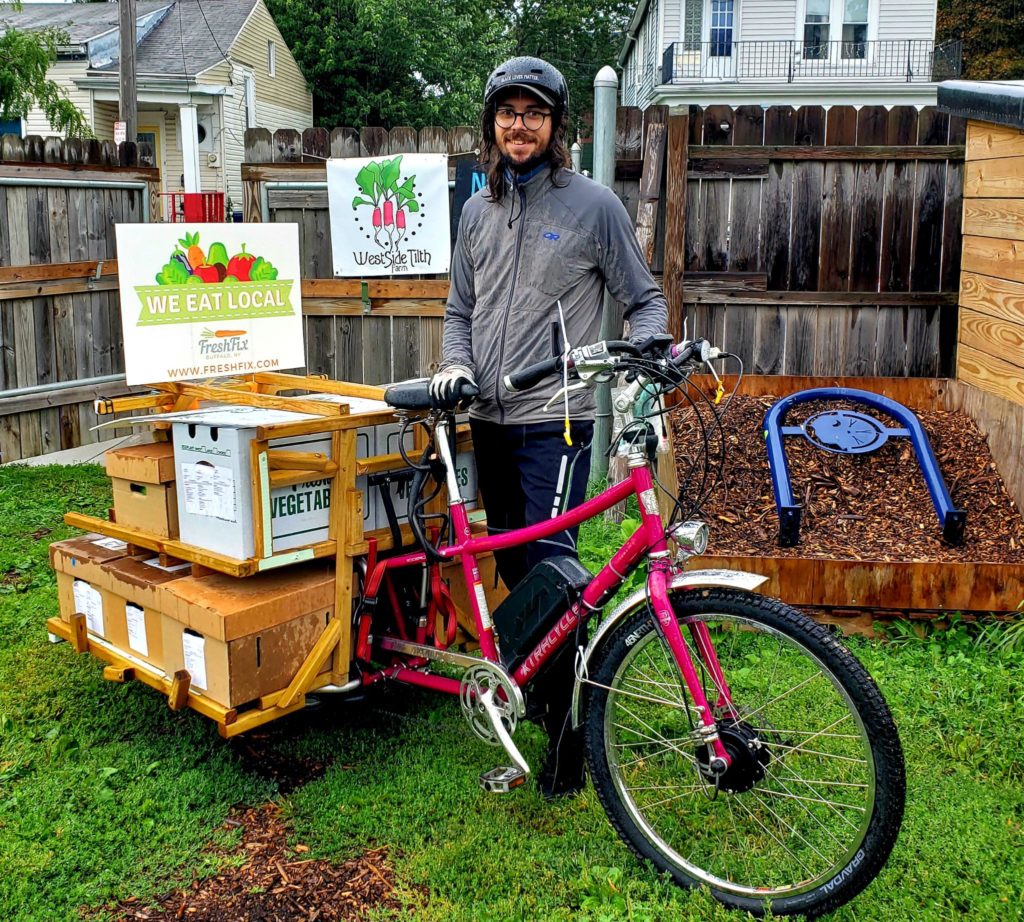 GB: For those who don’t know, what is FreshFix?

Tim: Sure. FreshFix is a locally owned company that is focused on delivering locally grown produce to people’s doors every week. They have a lot of contacts with all the local farms in the area and some of the urban farms. We put together a box of seasonal produce every weekend. Then we go out and deliver all of them the following week. But farmers harvest usually on Mondays, so we go and pick it up on Tuesdays, build those boxes, and then I’m delivering on my bike and other drivers are delivering on Wednesdays and Thursdays in the city and in the suburbs. It’s a great fresh food subscription service that keeps a lot of capital in the local economy.

GB: So what do you like about what you’re doing? Is there something special to you about working on your bike? Is there a deeper purpose for you?

Tim: Yeah, I think there’s a lot of different things about it that keep me going. But cutting on gas consumption and limiting the carbon footprint is great. It’s only me delivering by bike for FreshFix right now, and there’s some of the same work being done by Queen City Couriers. I like that I’m a living example that it’s possible to be a courier here in Buffalo.

Tim: I think there’s plenty of people who are interested in biking.  I think there’s more than enough people who would see the value of doing courier work over service jobs or white collar office jobs. We have more than enough people who bike, I think, in this city that we could  attract. The job is cool. It’s challenging some days, but also you’re  getting out there, you’re on the road, you’re staying in good shape, getting fresh air all the time, and moving around. I’ve worked office jobs for most of the last decade, until two years ago. And the difference in my fitness and my health has skyrocketed in the last few years. I feel better than when I was in my 20s. That’s the “getting the worker” side of things.

Then there’s the culture side of things. Buffalo is kind of like a gateway to the Midwest. Comparing Buffalo to New York City, or Boston, or Toronto doesn’t really fit well. People’s mindsets aren’t framed like  “Oh, I need something delivered from this company, or I need something delivered from one place to another locally, let me call up the bike couriers”. That’s what QCC (Queen City Couriers) is really driving to sort of make attractive and do now. But people are in that mindset of, “I need something to get something from A to B, let me hire a non local delivery company to get it driven to me.” So I think there has to be a change of mindset and a change in how companies do business. I know UPS works with bike couriers for r last-mile deliveries  in some cities. We can have that here. I’m also sure that if businesses knew that courier delivery was available to them, they would utilize it. 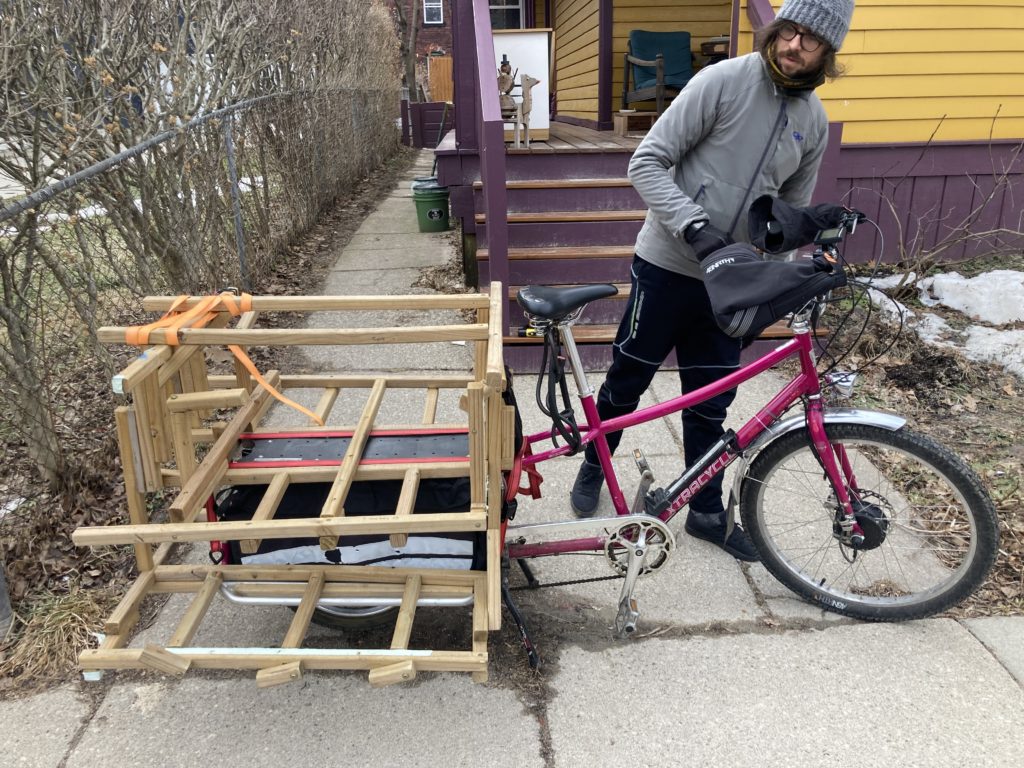 GB: What could be done to change the mindset?

Tim: Focus on visibility, just get people out there and working. Just being out there with a bike, a cargo rack and delivering produce, people stop you, they’re interested. They’re like, “Oh, that’s cool! What are you doing?” I’m like, “I’m delivering vegetables. Are you interested? You can get this every week if you want!” and people have  signed up through interactions like that.  They see the value in doing this,maybe paying a little bit more for something that’s better quality, more ethically responsible, locally produced, all that kind of stuff. People feel good about it. Myself and QCC, we are creating the momentum for this market.  We have to make people have a different mindset, have people think about how courier services can help them and have them know that it is a viable option.

GB: What do you think about the delivery apps, could they be integrated into the courier world?

Tim: Without naming those delivery apps, I think that they’re bad for everyone involved in the exchange. They take from the restaurants, the customer, and the delivery driver. I understand that there are some circumstances where people would need their dinner delivered to their door, but most of the time I feel that people should just order directly from the restaurant. Those apps are not good for local businesses.

As for courier services adapting an app-based platform, maybe that can work? It goes back to mindset. First, we would have to have restaurants willing to do business with courier services. But if they were willing, I’m sure that they would have a better experience than they already have with these app based delivery services.

GB: How long do you see yourself doing this work?

Tim: I had to go through a major career change over the last few years. Now I’m in a spot where I’m rethinking career goals, and I’m not really sure what’s in my future  yet. However, being self-aware of my skill sets and what I enjoy doing in terms of labor;  I see bike delivery as something that’s always going to be there for me. I think this kind of work is an ethical and sustainable way of contributing to our community, and society.  As long as I’m still  healthy and kicking, I’ll absolutely be doing this for the foreseeable future.